BIFA receives £250,000 in latest round of BFI Audience Fund grants 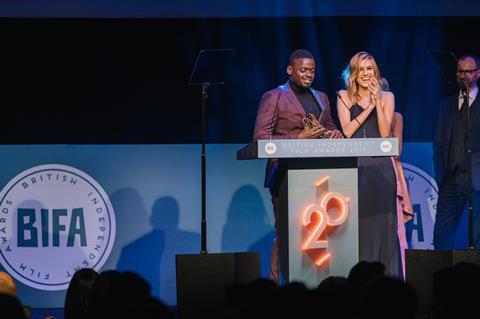 A £250,000 grant towards the British Independent Film Awards’ Back to the Cinemas campaign leads the BFI Audience Fund’s awards made from May to September 2020.

The award is to allow BIFA to create and implement the campaign, encouraging audiences to return to independent venues and highlight independent films as the sector begins to reopen.

It will also ensure BIFA can operate fully as a year-round industry partner, to highlight key titles and grow its social presence to priority audiences UK-wide.

A total of £708,003 in awards was given out by the Audience Fund in the May-September period, in a challenging time for the exhibition industry with cinemas required to remain closed until July.

In May, the BFI’s head of audiences Ben Luxford told Screen the Fund would be “very relaxed” when it came to activity and targets during the coronavirus-induced shutdown.

Distribution awards included £30,000 to Picturehouse Entertainment for the release of Phyllida Lloyd’s Herself; although the release, originally scheduled for October 16, was postponed ‘until further notice’ on Tuesday This is due to the closure of all Cineworld and Picturehouse cinemas from this weekend.

That award will stand so long as the release takes place within the current financial year.

Further awards included £53,453 to distributor Dartmouth Films to help promote Yemi Bamiro’s UK documentary One Man And His Shoes, which will be released on October 23.

Last week the BFI awarded £650,000 from the Department of Culture, Media and Sport’s Culture Recovery Fund to 42 independent UK cinemas, as part of a £30m total package in the Fund, which was established in July.