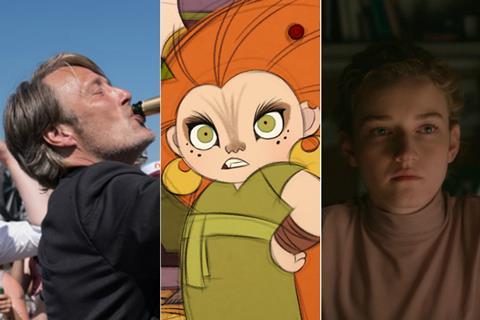 ‘Another Round’, ‘Wolfwalkers’, ‘The Assistant’

The longlist is the latest to be revealed this week, following the first three new talent categories on Tuesday and yesterday’s most promising newcomer list. The final longlist, for best documentary, will be revealed tomorrow.

Scroll down for the full international film longlist

Cannes 2020 label selection Another Round premiered at Toronto in September. It has already won three prizes at San Sebastián, the audience awards at London and Ghent, and is nominated four times at December’s online European Film Awards including best film, best director and best actor for Mads Mikkelsen. Yesterday Denmark submitted the film as its entry to the 2021 international feature Oscar; Studiocanal has UK rights and is currently rescheduling the title following pandemic-induced delays.

Animation Wolfwalkers had its world premiere at Toronto in September, and won the audience award at AFI Fest the following month. It is produced by Ireland’s Cartoon Saloon alongside Luxembourg’s Mélusine Productions. Wildcard Distribution handled a limited theatrical release in the UK and Ireland in October; co-producers Apple Original Films will launch the film online on Apple TV+ in December.

The Assistant premiered at Telluride 2019, going on to play Sundance and Berlin this year. Julia Garner stars in the depiction of the day in the life of a woman who becomes increasingly aware of the abuse that threatens her position as assistant to a powerful executive. A UK-Ireland release through Vertigo Releasing in April was moved online due to the first lockdown.

Also longlisted is Kornél Mundruczó’s Pieces Of A Woman, for which Screen Star of Tomorrow 2011 Vanessa Kirby won the best actress prize at Venice in September for her role as a woman grieving the loss of her baby. The title was picked up by Netflix after the festival, with a limited US theatrical launch planned for December 30 followed by an online debut in January.

Further selections include Shannon Murphy’s Venice 2019 selection Babyteeth, which Picturehouse Entertainment released in the UK and Ireland this summer to a £205,419 gross; and five documentaries – Boys State, Crip Camp, The Dissident (all US), Gunda (US-Norwegian) and Notturno (Italian-French-German).

Seven of the 17 titles from 20 directors are directed or co-directed by women; with four of the directors coming from non-white ethnic backgrounds.

The final five nominations will be announced on Wednesday December 9, with winners revealed in early February.

Another Round (Den-Swe-Neth-Fr) dir. Thomas Vinterberg

The Assistant (US) dir. Kitty Green

The Dissident (US) dir. Bryan Fogel