Cannes chiefs on Netflix debate: "Everything will change in the four or five years to come" 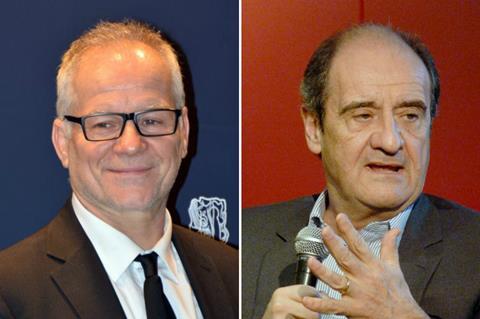 Speaking at the 2019 Official Selection press conference, Cannes director Thierry Frémaux and president Pierre Lescure addressed the ongoing debate about the absence of Netflix titles at the festival, with Lescure saying the festival “did well” in sticking to its rules.

To appear in Competition at Cannes, a film must be available for theatrical distribution in France, disqualifying Netflix titles released directly onto the streaming platform due to the country’s theatrical windows policy. This caused Alfonso Cuarón’s multiple Oscar-winning ROMA to miss out on a Cannes spot in 2018, instead premiering in Venice in August.

Frémaux, who last year said “we’ll see about 2019” for the inclusion of Netflix titles, said, “They are not there yet. We understand that perfectly well. Netflix has a business but also a political model. We talked to each other the day before yesterday, but the rule of Cannes is that films must be released in theatres, and in France.”

“Especially when we are encouraged by Steven Spielberg and Jean-Luc Godard, we are not ready to welcome films in Competition that will not see their audience in the theatre.”

Lescure echoed Frémaux’s words, saying the festival made the right choice in adhering to its regulations. “We did well. Netflix doesn’t want to play the rule of the territory, so we will suspend their involvement.“

He also noted the competitors to the streaming giant as a factor. “It’s not simply a match played last year between us, ROMA, Netflix and Venice. There are new players on the block. Netflix enjoys spectacular development, but what was their last communication? It was 48 hours ago – ‘Don’t worry, Amazon and Disney+ are coming, but it’s not the same content, we’re not in danger.’”

”What’s important for them is to prepare the opinions of their clients and shareholders for the arrival of the giants.”

Lescure did suggest that a change to the current distribution set-up was inevitable. “There will be an evolution of the windows; what will have changed in three to five years is generally speaking we won’t be able to have set windows for each and every movie.”

“We’ll have to have a more flexible, scalable situation, and windows that can move according to the character, budget and profession of the movies. Everything will change in four to five years to come – it is very healthy for the French professionals.”

The pair hinted that the festival is not about to adjust the theatrical rule in the near future. Lescure said: “It’s important to stick to the movement and not make any weakened promise”, while Frémaux added, “Globally speaking, movie theatres are doing rather well. I’d like to see my movie on the large screen at the Palais.”

The pair revealed 45 titles in the Official Selection: 18 titles for the Competition section (with Jim Jarmusch’s festival opener The Dead Don’t Die unveiled last week) as well as films for the Out Of Competition, Un Certain Regard, Midnight Screenings and Special Screenings strands.

When asked if the lack of a closing film in the announcement meant the Palme d’Or winner would close the event, Frémaux smiled and said, “There will be a closing film. Or the Palme winner. We’ll see.”

Further titles are expected to be added to the programme in the coming weeks. The titles announced so far are available here.