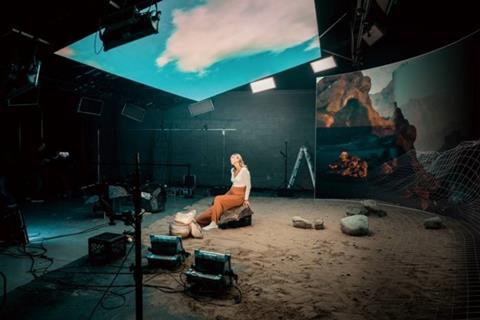 The V-Studios permanent facility is set to open at the end of this year and will be based in Portland Mews Soho. It will include a 10-metre-by-5-metre LED wall and is being powered by the disguise Extended Reality (xR) technology, which blends virtual and physical worlds together.

This is the latest in a number of new virtual production studios being built in the UK and across the globe, as the new technology allows filmmakers to use walls made up of LED panels that, with the help of a game engine, display real-time backdrops and visual effects, all directly on set. Major films and TV series to use the technology include Disney’s The Mandalorian, Fox’s Avatar and Netflix’s 1899.

Film Soho’s V-Studios “will allow filmmakers to place actors in breath-taking, completely controlled virtual environments, without ever having to leave Central London, and will feature a 1.5mm pixel pitch, meaning productions can get closer to the screen than ever before,” Film Soho said in a statement.

The studios’ technology will also be able to provide other solutions, such as pre-visualisation, virtual location scouting, additional photography and feature film pick-ups.

Film Soho will present a preview of the technology in the garden of the Grand Hotel at the Cannes film festival on Friday, May 20.

The Film Soho group encompasses a number of brands, including Soho Talent, which develops and works with established actors to co-produce content; production company Captain Dolly led by Sally Phillips and Ronni Ancona; Studio Soho Distribution; Film Post; and KrADR, an ADR (automated dialogue replacement) studio that has worked with the likes of Netflix (Top Boy) and Universal (Downtown Abbey).