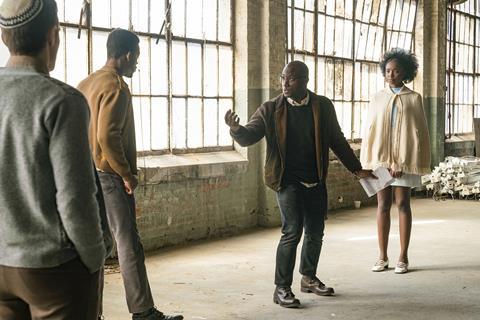 Barry Jenkins on the set of ‘If Beale Street Could Talk’

The Gotham Week Conference exploring the art and business of film and media returns and programming highlights include the inaugural Gotham Week Expo, which will bring together partners from The Gotham’s Expanding Communities, Owning It, and Gotham EDU programmes to showcase thought leadership on the advancement of the film and media industries.

Chilean filmmaker Court garnered awards recognition with Venice 2019 entry White On White and his new project Three Black Nights follows a peasant who asks the devil for the death of his wife’s lover in a move that overturns the colonial structures that endure in Chile. is Giancarlo Nasi produces.

Johnson is participating with Obelia about a young rebellious girl in 1950s New South Wales who must hide her Aboriginal identity after escaping a dangerous Aboriginal mission to join a traveling sideshow. Tim White produces.

International selections include Mohamed Samir’s Breakfast, Lunch, And Dinner which tells of an elderly woman who must resolve her 45-year-old stay-at-home son’s dependency before she dies. Marwa Abdalla is producing and the co-producer is Claire Chassagne. Samir directed 2013 Dubai International Film Festival selection Factory Girl.

Ukrainian filmmaker Bohdana Smyrnova will participate with And I No Longer Wonder How You Are, set in Ukraine in early 2022 as a young mother prepares to sell a kidney to save her home from foreclosure. Lyuba Knorozok, Smyrnova and Charles S. Roy are producing.

Among the US projects are: Untitled Texas Latina Project, an anthology about hometowns from Texas Latinas Sharon Arteaga, Lizette Barerra, Chelsea Hernandez, Paloma Martinez, and Iliana Sosa; Casey Friedman’s Flora Borealis about a botanist trying to save humanity; and Hard Feelings by Jo Hatcher in which a Black girl is accepted into her dream college and finds out she is pregnant from an ex-boyfriend.

Prior films and alumni that got their start at Gotham Week include Moonlight by Barry Jenkins (pictured), Beasts Of The Southern Wild from Behn Zeitlin, Dee Rees’ Pariah and Richard Linklater’s Slacker.

“Covering a wide range of formats, subjects, and genres, this year’s Project Market slate features some of the boldest and most exciting voices in independent storytelling,” said Jeffrey Sharp, The Gotham’s Executive Director. “We are thrilled to welcome everyone back to Gotham Week at Brooklyn Navy Yard where we look forward to supporting these excellent projects in person. As always, we are extremely grateful for our new and returning sponsors who provide critical support to independent creators and new voices in media.”