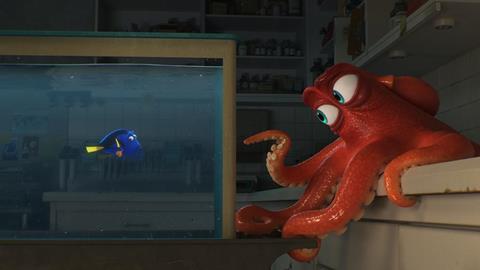 Few things make distributors happier than rain, and Disney will be especially grateful as Finding Dory reclaimed the top spot at the UK box office in its fourth week.

The latest Pixar offering boosted 18% as it swam to $3.8m (£2.87m), achieving the rare feat of regaining top spot later in its run. A few, like Ice Age: Continental Drift, have done it in their third weekend, while back in 2012, Skyfall reclaimed number one in its sixth weekend.

The remake enjoyed the best day of its run to date on Saturday [Aug 20] and was the third-biggest family offering this weekend, behind Finding Dory and The BFG but ahead of all new starters.

Warner Bros’ latest DC Entertainment adaptation is now up to a decent $36.2m (£27.67m). It enjoyed a better third weekend than stablemate Batman v Superman and should soon join this year’s £30m club.

That marks a $3,348 (£2,559) site average for the James Wan-produced original horror. It will hope to enjoy a healthy midweek as the major horror out in the market, before it will aim to scare off The Purge: Election Year this coming weekend.

David Brent: Life On The Road might be this week’s highest new entry, but eOne will likely be disappointed with the opening.

David Brent: Life On The Road will hope to buck the usual fast-burn trend for these kind of films and hold well this coming weekend, as well as enjoy decent midweek returns.

The Roald Dahl adaptation is now up to a superb $33.7m (£25.76m) and after adding $1.3m (£1m) over the past Mon-Thurs, will look to make the most of the final weeks of the school holiday. A £30m result is unlikely, but not yet an impossibility.

The adaptation likely suffered from the continued success of Finding Dory and The BFG, while Pete’s Dragon also offers significant family competition. With the market set to get even busier this weekend, it could struggle to make an impact.

Given the weak reviews, especially compared to other family offerings currently on release, it’s a solid start, but it’ll have to do most of its business over the coming week before children go back to school.

Sony’s single-location thriller is up to $2.2m (£1.7m) and is unlikely to catch director Jaume Collet-Serra’s House Of Wax ($3.9m/£3m) as his highest-grossing film outside of his Liam Neeson collaborations.

Soda Pictures released the film after its original distributor Metrodome was placed in administration last week.

Universal’s The Purge: Election Year receives a wide release, while Fox/Pathe’s Julieta and Signature Entertainment’s Kids In Love are among the films receiving a limited release.