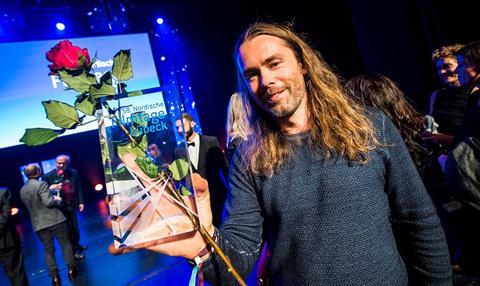 Gudmundsson’s debut was awarded the €12,500 NDR Film Prize by a jury including Swedish actress Inger Nilsson (who played the title role of Pippi Longstocking in the classic children’s films when she was nine years old), Munich-based producer Jörg Bundschuh (The Fencer) and film director Marc Brummund (Sanctuary), for a “feature film of special artistic quality”.

The intensely moving coming of age tale, which takes place over one summer at a remote fishing village in Iceland, is being handled by Berlin-based sales agent Films Boutique.

Hanne Larsen’s feature debut, Gilbert’s Grim Revenge, won the €5,000 Children’s Jury Prize as well as a special mention from the Children’s and Youth Film Jury, while George Kurian’s The Crossing about Syrian refugees making the dangerous journey across the Mediterranean received the €2,500 Documentary Film Prize from the Lübeck Trade Unions.

Sara Johnsen’s Framing Mom (Rosemari), which had opened this year’s edition of the Nordic Film Days on November 2, was presented with the €2,500 Interfilm Church Film Prize. Accepting the award on Johnsen’s behalf, producer Turid Oversveen made a special mention of Germany’s Michael Weber of The Match Factory who served as both co-producer and sales agent on the comedy.

In addition, the documentary jury gave an Honourable Mention to Anne Magnussen’s animated documentary The Man Who Knew 75 Languages, which had its world premiere in Lübeck.

Other awards included the Baltic Film Prize for Finland’s Oscar entry The Happiest Day In The Life Of Olli Mäki, the Children’s And Youth Film Prize for Renars Vimba’s Mellow Mud, and the Audience Award for Jesper W. Nielsen’s The Day Will Come.

At the parallel Lübeck Meetings industry programme, Maria Köpf, CEO of Hamburg Schleswig-Holstein Film Fund, spoke to producers from the Nordic countries about her desire to intensify collaboration and co-production between the North German fund and neighbours to the north.

The weekend also saw the 59th edition of DOK Leipzig coming to a close with the presentation of the awards at a gala ceremony on Saturday evening.

The Golden Dove in the International Competition for Long Documentary and Animated Film went to Ukrainian filmmaker Sergei Loznitsa’s latest film Austerlitz, which had its world premiere at the Venice Film Festival in September and will be released in German cinemas on December 15.

Speaking about its choice of Loznitsa’s film for the top honours, the international jury said “that the intrinsic tranquility and beauty of his images along with the remarkable sound editing allow plenty of time to think back once again on what occurred not so long ago in the middle of Europe.”

Awarded for the first time this year thanks to sponsorship by the local actor Uwe Steimle, the Silver Dove in the International Competition Long Documentary and Animated Film was awarded to Swiss director Heidi Specogna’s Cahier Africain as the best film on the subject of democracy and human rights.

The Swiss-German co-production – which premiered in Locarno in August and is being handled internationally by Cologne-based Rushlake Media – also received the prize from the newly founded Interreligious Jury (formerly the Ecumenical Jury) which included representatives from the Jewish and Islam faiths in addition to the Protestant and Catholic Churches.

A total of 21 prizes were awarded at this year’s festival, including 7 Golden Doves and 2 Silver Doves, with a total of €77,000 in prize money.