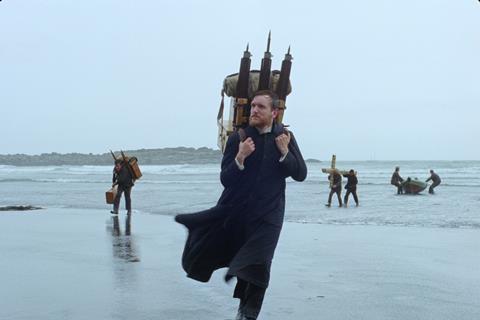 Jan Naszewski’s New Europe has closed a number of high-profile deals for Hlynyur Palmason’s Godland, which premiered in Cannes Un Certain Regard.

Curzon has taken rights for UK/Ireland, with A Contracorriente buying Spain, Scanorama for Baltics, Vertigo Media for Hungary and One from the Heart for Greece.

“Godland is a breathtaking piece of cinema filled with intelligent and subtle reflections on politics, art, history, religion, and nature,” said Eleonora Pesci, Curzon Film acquisitions executive. ”It was one of the very best films playing in Cannes.”

Godland is set in the late 19th century, when a young Danish priest, played by Elliott Crosset Hove, travels to a remote part of Iceland to build a church and photograph its people. But the deeper he goes into the unforgiving landscape, the more he strays from his purpose, his mission and morality.

Godland is produced by Katrin Pors, Eva Jakobsen and Mikkel Jersin of Denmark’s Snowglobe and Anton Máni Svansson of Iceland’s Join Motion Pictures. The companies previously collaborated on A White, White Day and NEST. Svansson has been collaborating with Palmason since his 2014 short Seven Boats.

Palmason was last in Cannes in 2019 with his second feature A White, White Day which screened in Critics’ Week and earned actor Ingvar Sigurðsson the rising star award.

Pálmason is working again with regular collaborators including DoP Maria von Hausswolff, editor Julius Krebs Damsbo and a group of actors he has worked with before: Crosset Hove and Vic Carmen Sonne from Winter Brothers and Sigurðsson from A White, White Day, as well as the director’s daughter, Ída Mekkín Hlynsdóttir, who also appeared in A White, White Day and NEST. The cast also features Jacob Hauberg Lohmann, Waage Sandø and Hilmar Guðjónsson.