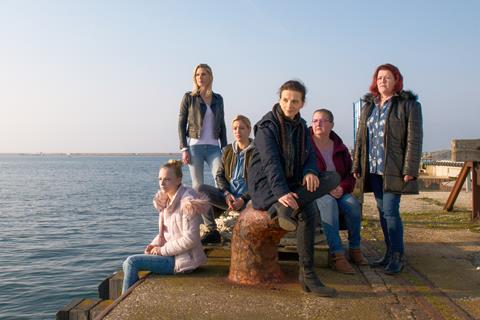 Clio Barnard’s Ali & Ava and Joanna Hogg’s The Souvenir Part II will be among the 24 features world premiering in Cannes Directors’ Fortnight, running July 7-17 this year.

The non-competitive Cannes parallel section, overseen by French directors guild the Société des Réalisateurs (SRF), has unveiled an eclectic 2021 line-up of new films by established directors and emerging talent at a press conference in Paris on Tuesday (June 8).

UK directors Barnard and Hogg were hotly tipped for Cannes 2020 until the main festival and parallel selections were cancelled due to the pandemic. Barnard has strong ties with Directors’ Fortnight having premiered The Selfish Giant there in 2013.

Ali & Ava stars Claire Rushbrook as a recently widowed woman in her 50s who begins to emerge from her loneliness thanks to a burgeoning friendship with a younger, music-loving man, played by Adeel Akhtar.

Hogg’s semi-autobiographical The Souvenir Part II picks up the life of aspiring filmmaker Jane, played by Honor Swinton Byrne, first visited in The Souvenir. The latter title, which originally world premiered in Sundance in 2019, will also get a Special Screening.

Further established talents in this year’s selection include respected French film and TV writer Emmanuel Carrère, whose second film Between Two Worlds will open the section. Juliette Binoche stars as a writer who goes undercover as a cleaning lady in the northern French port city of Ouistreham to research a book exploring growing social precariousness.

It is Carrère’s second film to play Directors’ Fortnight after he debuted first feature The Moustache in the section in 2005.

Other returnees include New York-born Italian filmmaker Jonas Carpignano with third feature A Chiara about a 15-year-old girl living in southern Italy whose life is upturned when her father abandons the family. Carpignano’s presented his second feature A Ciambra in Directors’ Fortnight in 2017.

Portuguese filmmaker Miguel Gomes also returns with The Tsugua Diaries, a joint work with documentarian Maureen Fazandiero shot on 16mm in Portugal during lockdown. Gomes was previously in Directors’ Fortnight in 2015 with his epic three-volume drama Arabian Nights.

Romanian director Radu Muntean is also back with Intregalde about a group of humanitarians on a mission to help a remote mountain population who do not receive the welcome they expect. Muntean was last in Directors’ Fortnight with Boogie in 2008 and then showed more recent films Tuesday, After Christmas and One Floor Below in Un Certain Regard.

French director Rachel Lang makes her Cannes debut with second film Our Men, about the lives of French Foreign Legion soldiers and their partners based in Corsica, which is the section’s closing film.

Further second and third features in the line-up include Uruguayan director Manuel Nieto’s drama The Employer And The Employee, starring French-Argentinian actor Nahuel Perez Biscayart and Uruguayan actor Cristian Borges as a farmer-landowner and a labourer whose different positions in life are brought into sharp relief by the death of a child in a tractor accident.

Italian-Iraqi director Haider Rashid has been selected with third feature Europa about a young Iraqi man trying to cross into Europe on foot who is hunted down by Bulgarian vigilantes guarding the border.

Also from Italy, Alessio Rigo de Righi and Matteo Zoppis will present second film The Tale Of King Crab, exploring the myths around a 19th-century Tuscan drunk who is exiled to Argentina’s Tierra del Fuego after he accidentally kills his lover.

Chinese director Shujun Wei, whose debut film Striding Into The Wind was feted with the Cannes 2020 label, will present his second film Ripple Of Life.

US artist, poet and filmmaker Saul Williams and Rwandan actress/playwright Anisia Uzeyman will unveil Neptune Frost. The Burundi-set sci-fi feature is described as “a love story between an intersex runaway and a coltan miner”.

A third of the 24 new films in the line-up are debut features.

They include the Hit The Road by Iranian director Panah Panahi, the first feature of the son of Jafar Panahi about which little has been revealed as yet, and Indian filmmaker Payal Kapadia’s A Night Of Knowing Nothing, revolving around the letters of a university student in India to an estranged lover.

Lebanese director Ely Dagher, who won the Palme d’Or in 2015 for short film Wave ’98, will present his long-awaited feature debut The Sea Ahead, starring rising actress Manal Issa as a young woman trying to reconnect with her life in Beirut after several years away.

Emerging talent from the Balkans also puts in a strong showing with the inclusion of French-Kosovan director/actress Luàna Bajrami’s The Hill Where Lionesses Roar and Croatian filmmaker Antoneta Alamat Kusijanovic’s Murina.

The Hill Where Lionesses Roar revolves around three bored teenagers who turn to robbery for a taste of adventure. Bajrami, who does not appear in the film, is best known internationally for her performance as the servant girl in Céline Sciamma’s Portrait Of A Lady On Fire.

Murina revolves around a frustrated teenager living with her young mother on a remote island off Croatia, under the rule of her oppressive father, whose life is shaken up by the arrival of a magnetic family friend.

It is lead produced by Danijel Pek at Croatian company Antitalent and Rodrigo Teixeira at RT Features, with Martin Scorsese’s Sikelia Productions, as part of their joint efforts to support emerging talent.

Out of France, French director Yassine Qnia presents first film A Brighter Tomorrow starring Soufiane Guerrab as a thirtysomething safecracker striving to be a good father, partner and son.

Anaïs Volpé’s debut The Braves stars emerging actresses Souheila Yacoub and Déborah Lukumuena as two best friends and aspiring actresses who are cast as the lead and understudy in a high-profile play in Paris.

Vincent Maël Cardona’s Magnetic Beats revolves around a group of friends in Brittany in the 1980s who run a free radio station. It is a joint production between Easy Tiger, best known internationally for Camera d’Or winner Divines, and Srab, which produced Ladj Ly’s Oscar-nominated and Cannes Jury Prize winner Les Misérables.

The selection will also show documentary Monrovia, Indiana by US filmmaker Frederick Wiseman who is being feted with the Carrosse d’Or award of Cannes Directors’ Fortnight this year.

The Employer And The Employee (Uru-Arg-Braz-Fr)
Dir. Manuel Nieto

A Night Of Knowing Nothing (Fr-India)*
Dir. Payal Kapadia

The Vandal (US)
Dir. Eddie Alcazar