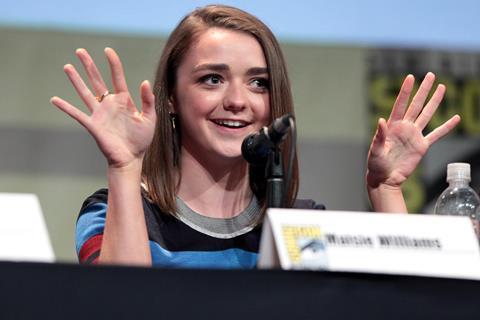 Maisie Williams is set to star in Julius Berg’s 1990s-set thriller The Owners revolving around the burglary of an isolated house by a group of young delinquents that goes badly wrong when the elderly inhabitants turn the tables on the intruders.

The screenplay, written by Berg and Matthieu Gompel, is based on the comic book Une Nuit De Pleine Lune by Belgian artist Hermann and writer Yves H.

The film is produced by Alain de la Mata at UK-based Bluelight, and executive produced by XYZ Films. XYZ will handle North American sales with Versatile handling international. The title is being launched at the EFM.

The home-invasion thriller will shoot this spring in Kent, near London, in an isolated Victorian mansion, with casting by Dan Hubbard.

It is Berg’s debut feature, following numerous TV directing credits including French crime-drama series La Forêt , which debuted on Belgium channel La Une before going out on Netflix internationally in 2018, and the France Télévisions series The Crimson Rivers.

The story follows hard-up childhood friends Nathan and Terry who are spurred on by an out-of-town sociopath named Gaz to rob Huggins, the elderly local doctor and his wife.

Williams, a Screen Star of Tomorrow in 2014, will play Nathan’s girlfriend Mary, who is dead-set against the plan but gets caught up in the action against her better judgement. When Dr. Huggins and his wife return early, they are quickly subdued but not for long and Mary finds herself fighting for life.

Williams is the only cast member confirmed so far. Best known for her role in Games Of Thrones, she attended the Berlinale as a European Shooting Star in 2015 on the back of her performance in Carol Morley’s The Falling.

Last year Williams voiced the character of Goona in Aardman Animation’s Early Man and she will next be seen in Marvel’s X Men: The New Mutants alongside Anya Taylor-Joy and Charlie Heaton; Josh Boone directs.

Williams is repped by Louise Johnston Management (UK) and WME.

“I’m very proud that Maisie Williams is joining the cast of The Owners. Her already impressive experience will bring great force and vitality to her character and to the narrative of what promises to be a particularly intense thriller. Beyond her great talent, she is an actor possessed of a profound humanity with who I am greatly looking forward to working,” said Berg.