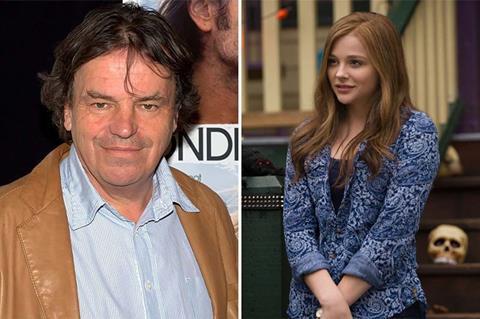 New works from Neil Jordan and John Butler are among the projects being supported by the Irish Film Board in its latest round of funding decisions.

Upcoming projects from Kirsten Sheridan, Roddy Doyle and Stefanie Preissner, which are in development, are also being backed by the national film body.

The Widow, co-written by Jordan and Ray Wright and directed by Jordan (The Crying Game), was granted €650,000 in production funding from the IFB, the highest single figure this quarter.

Currently filming on location in and around Dublin, Jordan has assembled a big-name cast including Chloe Grace Moretz, Maika Monroe, Isabelle Huppert and Stephen Rea for his latest. The Widow centres on a young woman (Moretz) who forms a friendship with an enigmatic older woman (Huppert), whose intentions may be more sinister than they initially seem. Regular Jordan collaborator Rea plays a private detective tasked with investigating her dealings. Metropolitan Films is producing with Sierra/Affinity handling international sales.

The forthcoming film from writer/director John Butler (Handsome Devil) was in receipt of €600,000 from the IFB. The project, Papi Chulo, is set in Los Angeles and is a comedy/drama about the relationship between a gay weatherman and an older straight Latino man. Treasure Entertainment is producing.

Top Irish comedian and actress Maeve Higgins will head the cast of Extra Ordinary, a new comedy produced by Katie Holly and Ailish Bracken at Blinder Films, which was awarded €625,000. The debut feature from Mike Ahern and Enda Loughman (aka DADDY) stars Higgins as a lonely driving instructor. The project, which already generated interest when it participated at the inaugural Frontiers Finance and Packaging Forum in Amsterdam, will shoot on location in Cork next spring.

In co-production decisions, Parallel’s and Sienna Films’ Sweetness In The Belly, adopted from the novel by Camilla Gibb, was awarded €250,000. Zeresenay Mehari, whose first feature Difret won the audience award at Sundance in 2014, will direct a screenplay from Laura Phillips. Saoirse Ronan is already attached to the project, which tells the story of a young woman who is orphaned in Africa and then flees her adopted home to escape civil war.

Ripple World Pictures’ Justice.Net, directed by Pol Cruchten (Voices From Chernobyl) from a script by Thom Richardson, was granted €150,000.

In documentary production, documentary maker Ross Whitaker (When Ali Came To Ireland) was granted €150,000 for his latest project, Comeback, with True Films producing.

Sheridan is writing and developing Until Victory Always, the story of how Irish gaelic games manager Jim McGuinness turned a team of underdogs in his native Donegal into national All-Ireland football champions. McGuinness went on to work successfully with Celtic Football Club. IFB has awarded €19,500, with Fastnet Films producing.

Writer Stephanie Preissner (Can’t Cope, Won’t Cope) was awarded €16,500 to adapt Closer Than This for Parallel Films. The coming-of-age story centres on two teenage twins growing up in Dublin.

Other projects awarded development funding include Rosie (€25,000), with Paddy Breathnach (Viva) directing a screenplay from Roddy Doyle for Element Pictures, and That They May Face the Rising Sun (€21,480) to be directed by Pat Collins (Song of Granite) and co-written by Collins and Eamon Little, with South Wind Blows films producing. The Doones, written and directed by Billy O’Brien for Element Pictures, was awarded €35,500.