Event to focus on the production, distribution and exhibition of Live Cinema events. 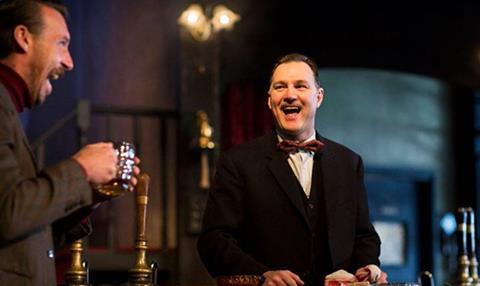 This article was amended on April 27 to remove mention of Secret Cinema, who will no longer be speaking at the conference.

The line-up has been revealed for the inaugral Live Cinema Conference, including representatives of NT Live and Picturehouse Entertainment.

The event will focus on live cinema – film screenings augmented through live performance or immersive elements – and will coincide with the publication of Live Cinema’s Arts Council-funded report on the live cinema industry.

The event will feature an afternoon of labs focussing on topics such as acquiring funding, intellectual property and licensing, audience development and marketing. The labs will be led by Live Cinema’s director Lisa Brook with NT Live’s marketing manager Victoria Murray and Charlotte Waelde, professor of intellectual property law at Coventry University.

Closing the day will be an NT Live screening of Martin McDonagh’s Hangmen [pictured], accompanied by an Edible Cinema-curated experience.

Lisa Brook commented: “Live cinema is a vital area of film exhibition internationally with rapid growth, and it is essential that the industry comes together to assess the state of play, and define the future and infrastructure of the area.”

The Live Cinema conference will take place on May 27 at King’s College London, click here for more details.