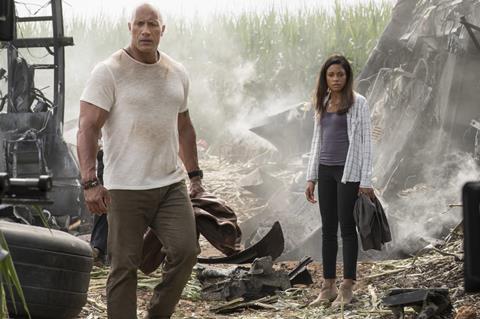 Rampage, the latest Dwayne Johnson star vehicle, stormed to the top of the UK box office this weekend with a three-day debut of £3.1m from 559 sites, an average of £5,617. The video-game adaptation has grossed £4.1m, including previews on Wednesday and Thursday.

That figure is roughly equitable with the film’s US launch of $34.5m (using the accepted wisdom of a UK opening being a tenth of a US opening, without converting the currency). Budgeted at $120m, Rampage is doing well internationally, particularly in China, and has already grossed  $148.6m worldwide.

Johnson’s appeal regularly helps to propel films to strong UK openings: Jumanji: Welcome To The Jungle posted an impressive £8.2m opening in 2017, while the Baywatch reboot garnered a seven-day opening of £4.6m, also last year, and the action film Central Intelligence opened to £3.1m in 2016.

Peter Rabbit dropped to second in the chart after an impressive four weeks at number one. The film grossed £2m this weekend, taking it to £38.1m to-date. It has now surpassed Paddington (£37.9m), and further family films including Monsters Inc (£37.9m), Finding Nemo (£37.4m), and Secret Life Of Pets (£36.6m).

Benefiting from strong word-of-mouth, A Quiet Place posted an impressive hold in its second weekend, dropping just 4% to £1.9m. With a gross of £6.4m, the film looks set to be a sleeper hit.

Avengers: Infinity War is now just ten days away. Next weekend sees the release of The Guernsey Literary and Potato Peel Pie Society via Studiocanal, Wildling via Warner Bros, The Leisure Seeker via Universal and Every Day via Vertigo.