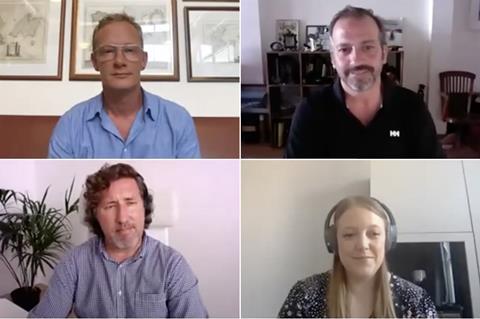 Spain’s “tremendous versatility” as a shooting location will suit the new normal for the global production industry under coronavirus, according to a panel of leading production specialists.

The panel was hosted by Chris Evans, news and locations editor at Screen’s sister publications KFTV and World of Locations. It is available to watch in full below.

“Spain is incredibly versatile,” said Mike Day, CEO at Mallorca-based production services firm Palma Pictures, which sponsored the Talk. It also has an office also in Barcelona. “About 80% of the time we’re asked to double for other countries – ‘can you find me Mexico City, Afghanistan, Greece, the French Riviera, the Caribbean?’ Often you have shoots where we’ll come to Spain for this cluster of locations.”

He cites Netflix’s The Crown and Amazon Studios Hanna as two recent examples.

After a lockdown that began on March 14 and lasted over two months, Spain’s nationwide state of alarm ended on June 21, and the country is now ready to welcome back international productions.

“We are starting to talk with clients and open the line in all the Canary Islands,” said Christophe Dupont, executive director at Lanzarote-based Paraiso Productions. “The planes arrive on the first of July. We will wait and see what happens in the summer-time months.”

The Islands have set up remote filmmaking facilities to allow production to continue for those who are unable to make the journey.

“A lot of the work that we conduct tends to be one or two weeks a month and then filming in other countries,” said Day, who acknowledged that “inevitably [some productions] will look at other options.

“We suspect that our first film and TV workflows will come through in the fall of this year,” he added. “We still have a busy pipeline of shows that want to come shoot with us in 2021 – we’re hoping that’s far enough into the distance for everything to right itself by then.”

“It was one of my best experiences shooting internationally,” said line producer Rachael Cole of shooting Hanna in Barcelona. “I hadn’t worked in Spain before: we had a wonderful time, the crew was exceptionally organised and allowed us to facilitate any type of filming that we wanted. There was no kind of crew that was out-of-bounds or any equipment that we couldn’t solve to reach our creative goal.”

She held particular praise for the line producer and location manager, who “just worked tirelessly to allow us to film where we needed to.”

Spanish location manager Tate Araez has worked in the industry for 30 years, including major projects such as Terminator: Dark Fate and The Crown. He recognises an increase in international interest.

“The job is mainly the same, but now many international [companies] are interested to come here,” he said.

Araez recently worked on Warrior Nun, a fantasy series for Netflix, working with a predominantly Spanish crew. “For the first time, it was only a showrunner, director, and DoP coming from the UK and US – all the crew was Spanish. It was very good – they were happy with how it worked, and they want to come back.”

Spain increased its filming incentive from 20% to potentially up to 30% in early May, with the Canary Islands now offering a rebate of 50% on the first million of a production and 45% on subsequent amounts.

“Spain is an extremely film-friendly country,” said Day. “To actually boost the incentive right now is testament to that.”

He particularly enjoys working in a country with such an extensive network of local film commissions. “In European terms, Spain has the second-highest amount of film commission representation after the UK,” Day added.

Netflix opened its first European production hub in Madrid in April 2019; the panel said the presence of streamers can be good for the industry, while acknowledging the challenges for independent creatives.

“It’s a supply-demand question – there’s a huge demand there,” said Day. “We have very pleasant experiences with the Netflix team – they come to us with great creative, well-funded shows, and they speak to us way in advance.”

“For an indie filmmaker there will always be challenges trying to find the right pricing point for the crew and infrastructure,” he continued, “particularly as you have big players like Disney, Warner, Netflix and HBO coming to town, and a crew member can go and work on a show for four or six months and be paid a certain salary that it might be harder for a micro-budget indie to.

“But producers are wily folks and will typically find a way.”