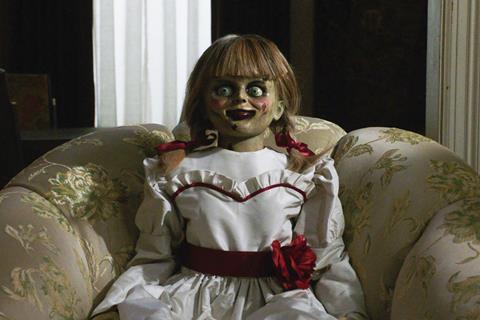 It is a quiet week for new releases at the UK box office, with the top holdovers from last week likely to retain their places at the top of the chart.

Newcomers include Warner Bros’ horror sequel Annabelle Comes Home, the third entry in the successful franchise, which itself is a spin-off of The Conjuring series of films. Gary Dauberman directs the latest entry, which features Vera Farmiga in the cast. Farmiga appeared in the previous two Conjuring films and also stars in the upcoming sequel.

Also out this weekend is Jim Jarmusch’s zombie comedy The Dead Don’t Die, which Universal is releasing widely. The film stars Adam Driver and Bill Murray and opened the Cannes Film Festival this year.

Altitude is releasing feature documentary Armstrong, about the titular astronaut and first man on the moon. The film had an initial event-style release on Tuesday (July 9) before rolling out more traditionally this weekend.

The documentary comes after two recent features that followed the same subject matter: fellow doc Apollo 11, about the mission that put Armstrong and his fellow astronauts on the moon, which Dogwoof released on June 28 – the film had taken £593,000 after last weekend. Universal’s First Man, a narrative story of the same events starring Ryan Gosling as Armstrong, opened with £2.5m in October 2018 and closed on £8.1m.

Entertainment One also has a documentary this weekend, Ron Howard’s Pavarotti. The film has taken $3.1m (£2.5m) in the US after being released on Tuesday (July 9). It chronicles the life of the opera legend. eOne is releasing the film on Saturday (July 13),

Curzon is releasing UK filmmaker Harry Wootliff’s debut feature Only You in 15 cinemas this weekend, day-and-date with the Curzon Home Video platform. The romantic drama stars Josh O’Connor and Laia Costa in the story of a couple who, after a chance encounter, decide to try and forge a solid relationship and have children. It was critically well received after premiering at the London Film Festival last year.

20th Century Fox is handling the UK release of Stuber, the action comedy starring Dave Bautista and Kumail Nanjiani. It premiered at SXSW this year.

Dogwoof is releasing Alison Klayman’s feature documentary The Brink, about Stephen Bannon’s attempts to spread extreme nationalism across the globe. The film premiered at Sundance this year. It has grossed a meagre £106,057 in the US to date via Magnolia.

Signature Entertainment is handling the UK release of Kursk: The Last Mission, the Danish director’s English-language submarine drama starring Colin Firth and Matthias Schoenaerts. The film received poor reviews after its premiere at Toronto last year. Vinterberg’s The Hunt grossed £228,691 in the UK in 2012, while his Far From The Madding Crowd took £6.2m in 2015.

Elsewhere, there are two significant re-releases in UK cinemas this weekend: Steven Spielnberg’s classic Jaws, via Park Circus, and The Matrix trilogy, via Warner Bros.