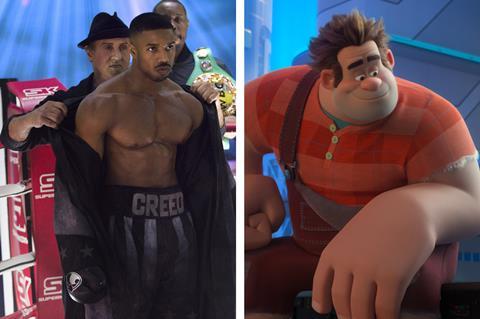 It is the battle of the sequels at this weekend’s UK box office, with last week’s table-topper Fantastic Beasts: The Crimes Of Grindelwald facing competition from boxing pic Creed II and family animation Ralph Breaks The Internet.

Disney’s Ralph Breaks The Internet, featuring a voice cast of John C. Reilly, Sarah Silverman and Gal Gadot, is the sequel to 2013’s Wreck-It Ralph. The original film got underway with £4.5m in the UK and built to an impressive £23.8m. With the franchise now established and the second film generating good buzz, Ralph will be looking to top those figures. The sequel has been a monster in the US, opening with $56m and grossing $91.9m after two weekends – a comparative UK result would see it open above the £5m mark.

The previous Creed, a continuation of the Sylvester Stallone-fronted boxing franchise Rocky, with Stallone returning to star alongside Michael B. Jordan, began with £2.2m in the UK in January 2016 and ended on £5.9m. Warner Bros will be looking for the sequel to deliver bigger numbers. In the US, Creed II has been tracking behind Ralph Breaks The Internet, opening with $35.6m and grossing $62.7m to date.

Further new openers this weekend include a trio of titles being handled by Curzon. Sebastián Lelio’s Disobedience, starring Rachel Weisz and Rachel McAdams in the story of a forbidden love affair in the Orthodox Jewish community, is finally entering UK cinemas after premiering back at Toronto 2017. The film is up for six awards at this weekend’s BIFAs, including best British independent film and best actress for Weisz.

Curzon is also handling the UK theatrical rollout of two Netflix titles this weekend. Alfonso Cuaron’s ROMA will initially be released in a solitary venue, London’s Curzon Soho, before expanding to two next weekend (adding Curzon Bloomsbury) and then the full Curzon network the week after. As Screen reported recently, Netflix has said that it is open to potentially putting the film into more independent UK venues.

Curzon is also releasing Netflix’s Mowgli, which is also screening in a single site this weekend, Curzon VIctoria.

Dogwoof is opening one of the year’s awards season front-running documentaries this weekend, Tim Wardle’s Three Identical Strangers. The film, telling the true story of identical triplets who re-discover each other in a chance encounter having been separated at birth, is produced by the UK’s RAW and premiered at Sundance in January 2018.

Trafalgar Releasing is looking to continue the recent success it has had with the event cinema releases of K-Pop documentary Burn The Stage: The Movie – which broke the global admissions record for an event cinema release two weeks ago – and Coldplay film Coldplay: A Head Full Of Dreams, which recently grossed £509,500 on a one-night engagement.

This Thursday (Nov 29), it had a one-night engagement of the filmed version of the Tony Award-winning stage show The King And I: From The London Palladium. The film clocked more than 135,000 admissions worldwide, making it the biggest theatre event in global cinemas in 2018. In the UK, it took £959,171 (a non-final figure with sites still to report), landing top of the chart for that day with more than double the takings of the next biggest film (Fantastic Beasts: The Crimes Of Grindelwald). As a result, the distributor is scheduling encore screenings in the UK and worldwide for December.

Further releases include Vertigo Releasing’s Anna And The Apocalypse, the zombie musical which has been a film festival hit this year. Sony Pictures is plotting a wide release for Diederik Van Rooijen’s horror The Possession Of Hannah Grace. MUBI is handling UK rights on Jean-Luc Godard’s The Image Book, which premiered in Cannes’ Competition this year. New Wave is handling Nuri Bilge Ceylan’s The Wild Pear Tree, continuing its good relationship with the Turkish director. Studio Soho Distribution is releasing festive-themed Surviving Christmas With The Relatives, which was produced in-house by the company.