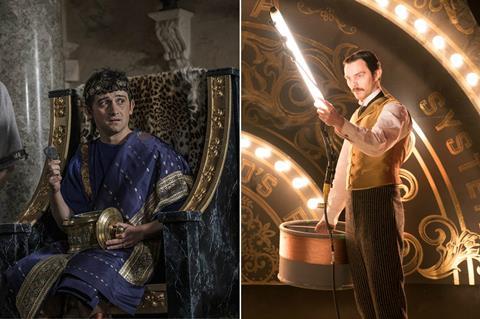 Two UK features will be vying to tap into specific corners of the market at the UK box office this weekend.

Horrible Histories: The Movie - Rotten Romans,based on the much-loved children’s book series, will be hoping to make a splash with family audiences.

The film is one of the first in-house productions from UK mini-studio Altitude and will also mark the company’s widest ever release, with the title set to enter more than 500 cinemas today (July 26).

It’s a big bet for Altitude, which is hoping that it will be the first entry in a franchise of Horrible Histories adaptations. While reviews have been middling, the family market can be critic-proof to an extent. Perhaps a more pressing question is whether audiences have had their fill of Disney’s The Lion King yet, which posted the second-highest UK box office opening of the year last weekend with £16.7m.

The forecast in the UK this weekend looks rain-heavy, following a week of near-record-breaking heat, which could be a boon for cinemas.

Launching a new franchise is never easy, but Horrible Histories has the benefit of having been both a successful series of books and a long-running TV series on the BBC.

Also on release this weekend is The Current War, Alfonso Gomez-Rejon’s story of the race between electricity titans Thomas Edison (Benedict Cumberbatch) and George Westinghouse (Michael Shannon) to determine whose electrical system would power the modern world.

Entertainment Film Distributors is handling the title. The company has had success this year with Midsommar (£2.2m to date) and Fisherman’s Friends (£7.4m) and its latest release is set to go wide this weekend.

Historical biopics have a history of tapping into the UK’s older audience. Cumberbatch previously starred in The Imitation Game, about Alan Turing, which grossed an excellent £16.4m back in 2014, for example.

The Current War has had a troubled history, however, since its debut at Toronto back in 2017. The film was caught up in the collapse of the Weinstein Company following misconduct allegations against former executive Harvey Weinstein, and was only extracted from the company in October 2018 when 13 Films and Lantern Entertainment acquired the Weinstein library. EFD then picked up UK rights, while David Glasser’s 101 Studios took US rights and is releasing in October.

Also on release this weekend is Peccadillo Pictures’ documentary Are You Proud? Ashley Joiner directs the celebration of the history of the LGBTQ+ Pride movement in the UK. It was produced by Dan Cleland of Lions Den Films and premiered at Glasgow Film Festival earlier this year.

Dogwoof is releasing Marianne & Leonard: Words Of Love, Nick Broomfield’s documentary feature about the relationship between the late singer Leonard Cohen and his Norwegian muse Marianne Ihlen. The project premiered at Sundance this year and has grossed $373,398 (£300,000) via Roadside Attractions to date.

Piece Of Magic Entertainment is handling the annual event cinema release of violinist Andre Rieu’s Maastricht Concert. The releases have tended to break the UK record gross for a concert doc year after year. The 2018 entry took an impressive £1.8m across two days.

Alongside The Lion King, which barring a disaster will hold onto its place atop the chart this weekend, key holdovers include Toy Story 4 and Spider-Man: Far From Home.