UK box office preview: What will challenge 'Fantastic Beasts: The Crimes Of Grindelwald'? 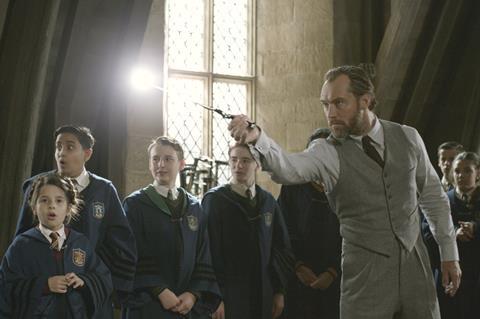 While the takings were down on predecessor Fantastic Beasts And Where To Find Them’s £15.3m opening in November 2016, the number still saw the film debut comfortably at the top of the chart and it will be tough to beat this weekend.

There are several new openers vying for the crown but no clear frontrunner to push Fantastic Beasts.

One challenger is eOne’s Nativity Rocks!, the fourth entry in the UK series of family Christmas films from director Debbie Isitt and producer Nick Jones.

With Christmas one month away, there could be a growing appetite for more Christmas-themed fare, with The Grinch having been on release for three weeks.

Further challenges could come in the form of Lionsgate’s Robin Hood reboot and Sony Pictures’ The Girl In The Spider’s Web . But it is understood neither has impressed in early previews.

Reviews have been mixed for the film, and the question remains whether audiences have  the appetite for another retelling of the steal-from-the-rich, give-to-the-poor franchise. Eight years ago, Ridley Scott’sRobin Hood, starring Russell Crowe and his memorably muddled accent, got underway with a decent £5.8m but ended on a soft £15.6m.

Facing a similar challenge is The Girl In The Spiders’ Web, featuring The Crown and First Man star Claire Foy as Lisbeth Salander. It is a reboot of the series of film adaptations originally based on Stieg Larsson’s series of crime novels.

Reviews of the film have been fairly poor and there is again the question of appetite, with the film coming eight years after David Fincher’s English-language remake of the original Swedish version of The Girl With The Dragon Tattoo. Fincher’s version starred Rooney Mara as Salander, alongside Daniel Craig. That film opened with £4.3m and ended on £12.3m. The Girl In The Spiders’ Web also doesn’t have the pedigree of being based on an original Larsson novel, having instead been adapted by David Lagercrantz’s spin-off, written some 10 years after Larsson’s death.

Further new openers this week include Thunderbird’s Shoplifters, Hirokazu Koreeda’s Palme d’Or- winning drama about a family of petty criminals in Japan. The film will be looking to become one of the year’s rare success stories in what has been a difficult 12 months for arthouse foreign-language releases.

Also on the list is CinEvent’s Pokemon The Movie: The Power Of Us, the latest animated feature in the Pokemon franchise, which is screening for one day on November 24 before returning to cinemas on December.