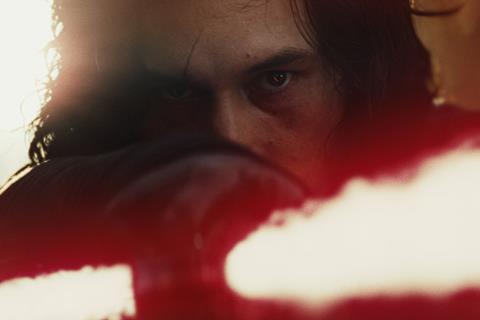 Dollar amounts are based on today’s conversions.

Disney made The Last Jedi the UK’s widest ever release by opening it in 708 sites, eclipsing Star Wars: The Force Awakens and The BFG’s 680 sites.

The Last Jedi posted an opening day total of $10.2m (£7.6m) and its Saturday result was $10.15m (£7.6m), the fifth-biggest day ever at the UK box office and the third best Saturday, behind The Force Awakens and Beauty And The Beast.

While the result is undoubtedly a resounding success, Disney may have hoped that by making the film the widest ever UK release, it may have beaten even more records.

In the international field, The Last Jedi delivered an estimated $230m (excluding China, which opens on January 5), adding to its US bow of $220m for a combined opening of $450m, the fifth biggest opening of all time.

Still previewing, family animation Ferdinand added another $1.34m (£1m) this weekend. Its previews now sit on a running total of $2.16m (£1.61m) ahead of its official UK release on Friday, Dec 22.