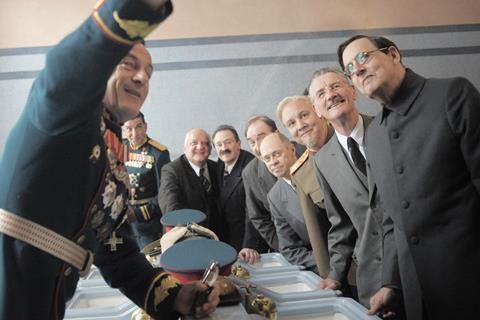 The Death Of Stalin enjoyed an excellent start to its UK run as it rounded off this week’s top five.

Having led the Fri-Sun market last week, Blade Runner 2049 officially returned to the top of the UK box office.

The arrival of Thor: Ragnarok tomorrow (October 24) will mean Blade Runner 2049 won’t retain the lead this coming weekend though.

As it did in the US, Geostorm had to settle for second place on its UK debut.

While Geostorm didn’t come close to the heights of disaster movies like The Day After Tomorrow, it did at least manage to top Into The Storm’s $1.51m (£1.15m) debut from 431 sites.

The latest outing in the popular animated series has now assembled $7.3m (£5.55m) in the UK and while it will benefit from this week’s school holidays, it won’t come close to the hauls of the previous two Lego movies.

My Little Pony charted sixth on its UK debut, having opened in Scottish cinemas last week.

Picturehouse Entertainment’s arthouse comedy is now up to a healthy $794,000 (£602,906), but now faces stiff competition for the midweek crowd from The Death Of Stalin.

Playing mainly matinees over the weekend, BBC Earth Films’ Earth: One Amazing Day grossed $37,000 (£28,407) from its 88 screenings with one site still to report.

Sony’s Call Me By Your Name receives a wide release, while Trafalgar Releasing’s Grace Jones: Bloodlight And Bami and Studiocanal’s The Merciless are among the films receiving a limited release.