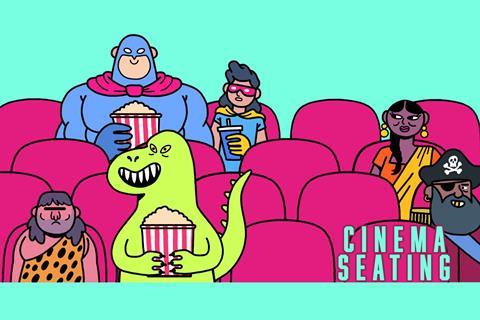 A campaign to reassure audiences it is safe to return to cinemas during the Covid-19 pandemic has launched in the UK today.

The UK Cinema Association has commissioned the campaign, which comprises two infomercials that explain the safeguards put in place by exhibitors to protect audiences from the spread of coronavirus.

They will be used on cinema and industry partner websites, social media channels and on the big screen itself as sites reopen. Cinemas in England began reopening on July 4, followed by Northern Ireland on July 10, Scotland tomorrow (July 16) and Wales on July 27.

Both 90-second infomercials explain the range of social distancing, hygiene and other protective measures being taken, which were detailed in government-approved safeguarding guidelines published by the UKCA on June 25.

UKCA CEO Phil Clapp said: “We know from our own as well as other surveys that there is an overwhelming desire amongst cinema-goers to return to the cinema as soon as they can, but equally that they and others want to understand and be reassured as to the safeguarding measures that will be in place when they do.

“We hope that the adverts we’ve launched today will offer that reassurance. The steps that all cinemas will take to protect both audiences and their teams are we think the right ones to help ensure that we will be able to deliver a safe but still enjoyable big screen experience.”

A recent survey by the Film Distributors Association (FDA) found that going to the cinema is the third most missed social activity amongst those surveyed, behind visiting family and friends and eating out – and ahead of shopping, going to the pub or attending live music or theatre events.

The survey also reported that more than 70% of cinema-goers say they will go back in the weeks following re-opening but want to want to understand and be reassured by the steps that cinemas are taking to help ensure their safety, in particular around social distancing.

It comes as face coverings becoming increasingly adopted in the UK in a bid to curb the spread of the virus and are set to becoming mandatory in shops and supermarkets in England from July 24.

In cinemas, the guidance outlines that guests should wear face coverings if they feel more comfortable but there is no expectation or requirement.

It is a position not shared by some cinema workers, which have issued renewed calls for such protection in line with the retail sector.

Cineworld Action Group, formed of UK employees of the multiplex chain and supported by union Bectu, said on Twitter: “With the announcement that face coverings will be compulsory in shops in England from the 24th, we are pushing for this legislation to apply in retail areas within cinemas as well as in foyers, corridors and toilets where social distancing will be harder to observe.”

A workers coalition from fellow chain Odeon also took to Twitter to reaffirm their position on face coverings and said: “Workers’ groups across UK cinemas have been calling for this obvious safety measure for weeks, only to be ignored by our employers. This industry needs to do better by us all.”