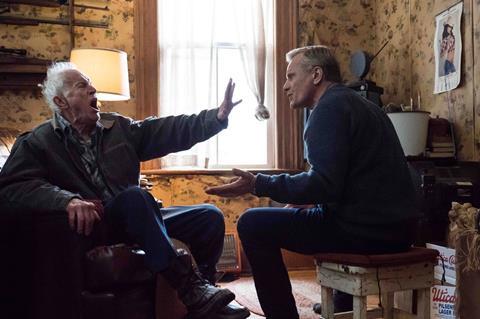 This week, Viggo Mortensen is heading to London to begin the editing process on Falling, his directorial debut. The film, in which Mortensen stars with Lance Henriksen and Laura Linney (see an exclusive first look above), is about a conservative father who moves from his rural farm to live with his gay son’s family in Los Angeles. The project is a very personal story, as Mortensen reveals in a catch-up with Screen.

“Both of my parents were ill. When my mother passed away, I was flying across the Atlantic after the funeral and I couldn’t sleep, I was remembering things she had said that I hadn’t thought of for years. The more I thought about my mother, the more I also thought about my dad, it became a back and forth between two characters and it became fictional, it wasn’t them anymore,” recalls Mortensen.

“That became the launching pad for a short story. I realised it was very visual, and if it was visual, it was a screenplay. I wrote it in two weeks and that was basically the screenplay we used. The route of it is my mother, and it becomes more about my father as it goes along. My father also passed away, two years after my mother,” he adds.

Alongside his acting work, Mortensen has produced before, including on Ana Piterbarg’s 2012 drama Everybody Has A Plan and Lisandro Alonso’s western Jauja (he also produces Falling, with Daniel Bekerman and Chris Curling). Stepping into the director chair wasn’t daunting, he says, because he could draw on watching “some very good ones [directors]” such as Peter Weir, Jane Campion and David Cronenberg.

Falling shot for 25 days in Canada and four days in California in March and April this year on a “very tight budget”. Mortensen explains that everyone on the shoot “worked for the minimum [pay]”, and that the money he made from the project has been reinvested into the production. “Unless this movie does unusually well someday, I won’t make any money from it,” he adds.

Mortensen would have preferred not to be in the film at all, he reveals, but having his name on the cast sheet was the only way to make it financially viable. “I would’ve preferred not to be in the movie, I have to say that, but to get it made one of the conditions was I had to act in it. I’ve been around for a long time as an actor, but if you haven’t directed a movie you haven’t directed a movie – I’m unproven and I’m lucky to get a chance,” he says, adding that if he gets the opportunity to direct again, and he has to be in it for financial reasons, he’d rather “just do a scene or two”.

London-based HanWay Films is overseeing international rights on the project and sealed a significant amount of territory deals during this year’s European Film Market in Berlin, as Screen revealed. “It was more than we expected,” admits Mortensen. UTA Independent Film Group is handling the US sale.

Mortensen hit the headlines earlier this month when he responded critically to the usage of an image of Aragon, the character he played in The Lord Of The Rings franchise, by Spanish far-right party Vox in a promotional tweet. The actor denounced the usage, calling it “ignorant” and “absurd”.

Reflecting on that exchange, Mortensen says he “could have let it go” to avoid drawing publicity to Vox, but “sometimes it feels like you should call it out”.

“These are the kinds of parties and movements that people like Steve Bannon are behind, it’s a similar line of thinking, the rise of the irresponsible right. Vox are homophobic, xenophobic, Islamophobic, anti-feminist, they essentially want to re-vindicate the Franco dictatorship. It’s a dangerous thing,” the actor explains.