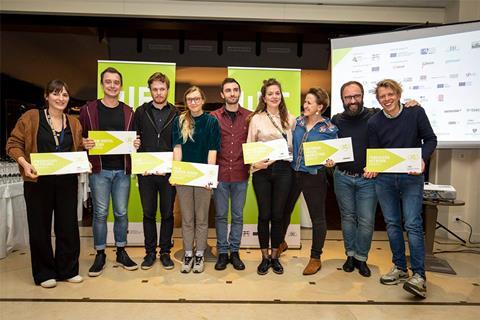 The 2019 When East Meets West winners

Projects from the Benelux, Poland, Slovakia and the Czech Republic were among the award-winners at the ninth edition of Trieste’s When East Meets West (WEMW) co-production forum (January 20-22).

The Flow Postproduction Award with €15,000 ($17,012) in postproduction facilities went to Slovak filmmaker Michal Blasko for his mother-son drama Victim which is being planned by Nutprodukce’s Bratislava-based sister company, Nutprodukcia, as a co-production with the Czech Republic and Ukraine.

In addition, Victim’s producer Jakub Victorin was selected by the EAVE training programme to receive a scholarship to attend the producers’ workshop in the future.

Two free accreditations to the Cannes Producers Network in May were awarded to Magalie Dierick, a junior producer at Ghent-based Cassette for timescapes, who had pitched Volkan Üce’s documentary All-In at the co-production forum, and to Dutch producer Derk-Jan Warrink who was in Trieste with filmmaker Floor van der Meulen to present her feature debut Methusalem to potential partners.

Van der Meulen - who won the Best European Short Film Award at the European Film Awards for 9 Days - From My Window In Aleppo in 2016 - was also presented with the European Women’s Audiovisual Network Award which was given for the third time at WEMW this year.

This year’s edition of WEMW also saw the announcement of the first two projects to be supported by the new Italian-Baltic Co-Production Development Award which had been unveiled during the Baltic Event in Tallinn last November.

Eight applications were submitted for consideration by a jury of funders from Italy and the three Baltic states. The first two projects to each receive €15,000 ($17,012) co-development funding are:

- Ultramondo, a fiction film for young audiences to be produced by Italy’s Solaria Film with Lithuania’s Fralita Films

The ninth edition of WEMW presented 22 film projects from 14 countries, which had been selected from 299 submissions coming from 49 countries.