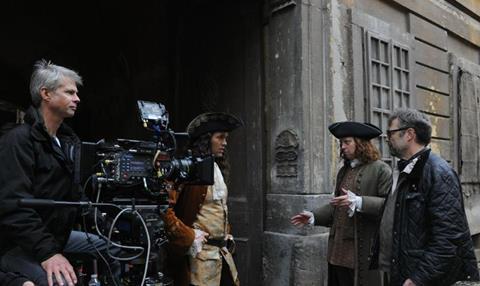 Jakob Oftebro (Kon-Tiki) plays the titular Danish-Norwegian Vice-Admiral Tordenskiold who was something of a rock star war veteran of his day, and who is still well known throughout Scandinavia.

Set in the year 1720, the story is about what happens to 29-year-old Tordenskiold when the Great Northern War ends and he doesn’t know what to do with the rest of his life. His trusted valet (Martin Buch) persuades him to go on a European ‘road trip’ to search for a bride. The cast also features Leonora Ployart.

“Tordenskiold is a towering legend in our shared Danish-Norwegian history,” said Genz, whose credits include Terribly Happy. “One thing about Tordenskiold always piqued my curiosity – his death! Tordenskiold dies at age 30 in an apparently accidental and pathetic duel. Why did this great hero end his days so ignominiously?”

Genz worked with Norwegian novelist Erlend Loe to write a script that reflects “the real person beneath the dust and veneer of history.”

“Our story focuses on Tordenskiold as a restless, rootless hero whose phenomenal fame is akin to that of a modern-day rock star. In strange ways Tordenskiold reminds us of the likes of Sid Vicious and Jim Morrison, or a movie legend like James Dean. What is it that kills such young and eccentric dreamers?” Genz added.

Lars Bredo Rahbek (Flame & Citron, Itsi Bitsi) produces for Nimbus Film, and the project is also backed by the Danish Film Institute. Co-producers are Sirena Film in the Czech Republic, Hummel Nimbus in Norway, and Anagram in Sweden. It is being readied for release in January 2016.

Rahbek’s slate at Nimbus also includes the next feature film from Charlotte Sieling, Mesteren, which is in development now and could also shoot in 2015. The story is about a world famous artist who reunites with his estranged son, a graffiti artist.

As previously reported by Screen, Nimbus has also optioned In Search of a Distant Voice by author Taichi Yamada, a Japanese ghost story that will be transplanted to Denmark.