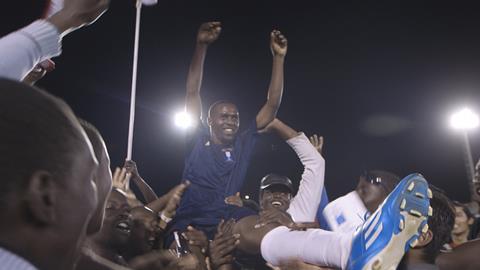 By day, migrant workers in Qatar construct stadiums for the 2022 World Cup; by night, they compete in their own soccer tournament in the same arenas. Grounding their on-field thrills in the off-field costs, Adam Sobel’s debut documentary scores two goals. Aping sporting conventions, The Workers Cup relates a riveting underdog tale about a quest for glory, while simultaneously probing the reality faced by the poorest people in the world’s wealthiest country.

That combination of a rousing narrative arc with a topical subject should help endear the documentary to audiences. Global media media coverage of actual, reported and forecast deaths during the building of World Cup infrastructure — in Qatar as well as Brazil, the four-yearly competition’s 2014 host nation — have been frequent in recent years. Indeed, it’s the type of informative, emotion-tinged feature which seems particularly likely to attract VOD viewers, particularly in soccer-enthused regions, after its premiere in the World Documentary stream at the 2017 Sundance Film Festival.

At the heart of The Workers Cup sits a truth that might otherwise have remained hidden to even the most avid soccer fans around the world. When the sport’s top competitors descend upon Qatar’s gleaming stadiums in five years time, they’ll be following in the footsteps of migrant workers from mostly African, Asian and Arab countries in more ways than one. The titular contest, which is packaged as a welfare initiative and sponsored by the same committee responsible for delivering the main event, may be a clear marketing ploy, but it allows the labourers to briefly kick rather than construct.

Lining up for their employer’s side dressed in navy jerseys and donning wide smiles of pride, Kenneth and Samuel from Ghana, Paul from Kenya, Umesh and Sebastian from India, and Padam from Nepal are eager to play in the 24-team tournament. They’re also well aware that their soccer heroics offer an all-too-fleeting reprieve from their 12-hour-a-day, seven-day-a-week work schedules — and from living in the prison-like Umm Salal Camp far removed from the populated centre of Qatar.

Sobel expertly intertwines the competitive action, jumping between palling around and playing, with the six men’s individual stories. In doing so, The Workers Cup’s many juxtapositions become obvious, but the film takes care to present the scenario at hand rather than pity those involved. “People come here to fulfill their dreams,” team captain Kenneth explains in a matter-of fact way, his tale among the most alarming. The aspiring footballer was lured to Qatar by the promise of playng professionally, only to discover he’d been duped upon his arrival.

A crew of two cinematographers and three editors — the latter including Sobel himself — help maintain the balance of hope and heartbreak that The Workers Cup strives for in the feature’s crisp, lyrical images, and through gentle pacing. In both, patience proves pivotal; like all efforts that endeavour to find even the slightest slivers of brightness in bleak situations, it’s the details that resonate.

These include the contrast of the team’s brilliant blue on-field kits with the faded hue of their work uniforms, the earnest camaraderie that grows between the group, and the happy sparkle in their eyes as they careen across the turf. The same remains apparent in more solemn moments, whether roving over the dusty shacks they call home, or focusing on furrowed brows as the men talk of love, money, family, duty and loneliness, with Sobel furnishing their plight with further context through explanatory on-screen text.