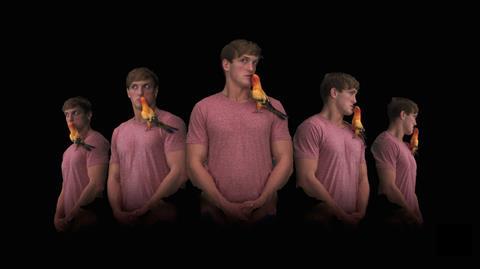 The dynamic roster encompasses features, a live performance, documentary and narrative mobile virtual reality experiences and a look inside the innovations at some of world’s leading media research labs.

Tenth anniversary exhibitions will also be presented with MoMA in New York City in April, and the Walker Art Center in Minneapolis as part of Northern Spark in June.

The New Frontiers line-up will take place in Park City’s Claim Jumper, The Gateway, a large-scale installation on Swede Alley by Chris Milk and a performance by Gingger Shankar at Festival Base Camp Presented by Canada Goose.

Beyond the dedicated physical exhibition spaces, audiences can experience more than 20 virtual reality pieces on mobile VR headsets. This year’s festival will also include a programme of New Frontier short films to be announced at a later date.

“For me, New Frontier has always embraced risk and innovation in a way that reflects the heart of Sundance and the ever-evolving nature of film,” said Sundance Institute president and founder Robert Redford.

“It champions films, artists and installations that use new media technology to expand, experiment and explode traditional storytelling. Independent artists continue to fuel the broader community with artistic innovation, bold thinking and groundbreaking narratives that can change the art of film forever.”

Sundance Institute executive director Keri Putnam said: “The tenth anniversary of our New Frontier programme offers an opportunity for us to reflect on the growth and celebrate the excitement of the field in this time.

“Sundance’s New Frontier programme has grown over the last decade to support groundbreaking artists with grants, the New Frontier Story Lab, regional workshops and a new virtual reality-focused residency. Our artists have evolved as quickly as the technology, and the program continues to produce work way ahead of its time.”

Shari Frilot, Sundance Film Festival senior programmer and New Frontier chief curator, added: “This year’s programme provides a sensory experience that powerfully transports audiences to uncommon places and ways of being, offering an opportunity to become viscerally aware of the vital connections between our brains, bodies and biosphere.

“The future of storytelling affords us the ability to observe ourselves and our instincts and become more conscious of the way we make choices and decisions.”

The Slithering Screens exhibition at MoMA in April will showcase landmark cinematic works that hack the theatre space drawn from the past 10 New Frontier exhibitions and is curated by Frilot and Rajendra Roy, Celeste Bartos chief curator of Film, Museum Of Modern Art.

Sundance Institute is supporting two commissioned immersive journalism experiments with a grant from the John D. and Catherine T. MacArthur Foundation, which will premiere online in 2016.

The first experiment The Click Effect, about whale communication, will be a collaboration between Vrse, journalist James Nestor and filmmaker Sandy Smolan and is designed to enable independent journalists to explore VR as a way of communicating stories.

In addition to the New Frontier programme announced on Thursday, films in the US and World Competitions, NEXT and Midnight sections already announced are listed at www.sundance.org/festival.

The full list follows. All synopses provided by the festival. All events are world premieres unless otherwise stated.

Cameraperson (USA)
Director: Kirsten Johnson
By exposing her role behind the camera, Johnson reaches into the vast trove of footage that she has shot over decades around the world. What emerges is a visually bold memoir and a revelatory interrogation into the power of the camera.

Notes On Blindness (UK-France)
Directors: Peter Middleton, James Spinney
After losing his sight, John Hull knew that not understanding blindness would destroy him. In 1983, he began to keep an audio diary. His recordings represent a unique testimony of loss, rebirth, and renewal, excavating the experience of blindness and documenting his discovery of “a world beyond sight.” Project includes a mobile VR experience.
Cast: Dan Skinner, Simone Kirby.

In The Eyes Of The Animal
Artists: Barnaby Steel, Robin McNicholas
A 360-degree virtual reality experience presented on sculptural headsets, this work is an artistic interpretation of the sensory perceptions of three British animal species. Immerse yourself into this world from the forest floor to the tops of trees, and tread carefully as you observe through the eyes of the animals.

Walden, A Game
Artist: Tracy Fullerton
Key Collaborators: Todd Furmanski, Lucas Peterson, Michael Sweet
In this game simulation of Henry David Thoreau’s experiment in living at Walden Pond from 1845 to 1847, players walk in Thoreau’s virtual footsteps, attend to the tasks of a self-reliant existence, discover the beauty of a virtual landscape, and engage in the ideas and writings of this unique philosopher.
Cast: Emile Hirsch.

6x9: An Immersive Experience Of Solitary Confinement
Artists: Francesca Panetta, Lindsay Poulton
Right now, more than 80,000 people are locked in tiny concrete boxes where every element of their environment is controlled. They are confined to spaces with no human contact, and the sensory deprivation they endure causes severe psychological damage. These people are invisible to us – and eventually to themselves.

The Abbot’s Book
Artists: Michael Conelly, Lyndon Barrois
Key Collaborators: Keith Goldfarb, William Telford
Four generations of an Italian noble family are cursed by the corrupt power of an ancient book unearthed from the catacombs beneath their estate. Rich with traditional gothic-inspired mythology, the story follows a scion of this cursed family attempting to shield his heirs from the inevitable darkness.
Cast: JB Blanc.

Cardboard Crash
Artists: Vincent McCurley, Loc Dao
A virtual reality experiment questions the ethics of artificial-intelligence algorithms in self-driving cars when they are faced with difficult decisions during an unavoidable crash event. Given varied cultural and individual ethics, who should be designing these algorithms, and how should they be chosen?

Collisions
Artist: Lynette Wallworth
Journey to a remote desert in western Australia that is home to indigenous leader Nyarri Morgan and the Martu tribe. Nyarri’s first contact with Western culture was in the 1950s via a dramatic collision between his traditional world view and the cutting edge of modern technology.
Cast: Nyarri Nyarri Morgan, Curtis Taylor.

Condition One
Artists: Danfung Dennis, Casey Brown, Phil McNally; Key Collaborators: Jay Brown, Andrew Delpit, Chris McClanahan
Encounter a majestic jaguar deep in the jungle, lie with a nesting sea turtle on a windy beach, and fly with monarch butterflies, all before they disappear. This powerful virtual reality experience is a glimpse into the habitats of Earth’s endangered species.

Defrost
Artist: Randal Kleiser
Key Collaborator: Tanna Frederick
In this futuristic, sci-fi virtual reality adventure, viewers are put in the seat of a woman who wakes up after being frozen for nearly 30 years to reunite with her family. The reunion is bittersweet, as the passage of time has caused her loved ones to become strangers.
Cast: Carl Weathers, Bruce Davison, Tanna Frederick, Christopher Atkins, Ethan Rains, Clinton Valencia.

fabulous wonder.land
Artists: Toby Coffey, Lysander Ashton, Ollie Lindsey
Key Collaborator: Mahdi Yahya
Fall down the rabbit hole and experience the magical and vibrant digital world of the Royal National Theater’s wonder.land stage show. Watch and listen with VR technology as the Cheshire cat hovers above like a magnificent holographic airship while serenading you to “Fabulous,” a song from the show.
Cast: Hal Fowler.

Job Simulator
Artists: Alex Schwartz, Devin Reimer
This experience of manning an office cubicle is a unique blend of storytelling, comedy, and intuitive game mechanics that focuses on micro-interactions. Pick up a tomato, smash a glass, and explore a sandbox world with childlike wonder, while ignoring established gaming systems.

Kiya
Artist: Nonny de la Peña
Key Collaborator: Emblematic Group
In this harrowing virtual reality story of a real-life domestic violence homicide, two sisters engage in a doomed struggle to save the third from being shot and killed by her ex-boyfriend. Utilizing audio and imagery captured at the real event, this piece transforms the audience from viewers to active witnesses. Cast: Lee Sherman, Toyin Moses, Tripp Pickell, Diana Toshiko.

The Martian VR Experience
Artists: Robert Stromberg, Ridley Scott
Key Collaborators: Fox Innovation Lab, RSA Films, VRC
Step into the shoes of astronaut Mark Watney as he performs tasks that will facilitate his chances for survival and rescue. Viewers can fly onto the surface of Mars, steer at zero gravity through space and drive a rover, deepening the experience of key scenes from Ridley Scott’s hit film, The Martian.

Perspective 2: The Misdemeanor
Artists: Rose Troche, Morris May
Key Collaborator: Charles Ottaway
When two men are stopped by a police officer, a simple misdemeanor spirals out of control, turning the situation rapidly antagonistic. With each party suspecting the other, no one is able to stop the chain of events that follows.
Cast: Shemar Jonas, Javon Jones, Joey Auzenne, Johnny Tchaikovsky.

The Rose And I
Artists: Eugene Chung, Jimmy Maidens, Alex Woo
Key Collaborators: Terry Kaleas, Ryan Shore, Nick Sung
An immersive, animated VR film crafted by the artists, hackers and storytellers of Penrose Studios, The Rose and I is about loneliness, friendship, love, and loss. Come meet a lonely Rose living in the unlikeliest of places, and be transported into a brand new universe.
Cast: Rachael Bigelow.

Sisters
Artists: Robyn Gray, Andrew Goldstein, Michael Murdock
Key Collaborator: Philip Eberhart
Be careful where you look because someone or something doesn’t want you here. Otherworld presents two chapters in their popular horror series. Experience two sets of thrills and chills as you physically walk through a haunted house and experience a virtual reality ghost story that will scare your pants off. Cast: Julia Chalker, Greg Vogt.

Sonar
Artists: Philipp Maas, Dominik Stockhausen
When a drone receives a faint distress call emerging from an unknown asteroid, it journeys to locate the source of the signal and ventures into a deep, ancient labyrinth that holds a secret even darker than space itself.

Surge
Artist: Arjan van Meerten
An abstract meditation on the evolutionary process and its relentless march towards complexity, this virtual reality music video was produced over the course of a year, with Arjan van Meertan creating all of the music, animation, and code himself.

The Unknown Photographer
Artists: Loic Suty, Osman Zeki, Claudine Matte; Key Collaborators: Catherine Mavrikakis, François Lafontaine
This immersive documentary unveils a journey into the heart of the First World War through hundreds of photographs that were found in the abandoned workshop of a country house in Quebec, Canada. Cast: Julian Casey, François Papineau.

Waves Of Grace
Artists: Gabo Arora, Chris Milk
Key Collaborators: Imraan Ismail, Samantha Storr, Patrick Milling Smith
In this experience viewers are transported to the most populous slum in the capital city of Liberia, where Decontee Davis, an Ebola survivor, uses her immunity to help others affected by the disease.
Cast: Decontee Davis.