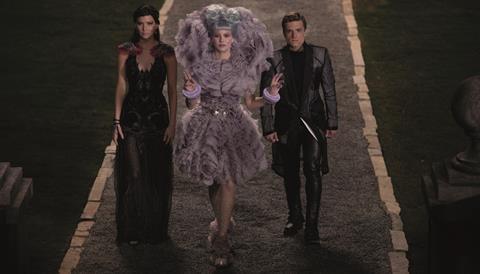 It seems the odds were in its favour. The Hunger Games: Catching Fire ignited the UK box office on debut to dethrone Gravity at the top of the chart.

Not only is Catching Fire’s debut over double that of its predecessor’s $7.9m (£4.9m) UK opening, but it also marks Lionsgate UK’s best-ever opening.

The Hunger Games went on to take $38.9m (£24m) in the UK and a tally of over £30m seems highly possible for Catching Fire, which would make it only the fifth film to cross the £30m mark this year.

Warner Bros’ sci-fi is now up to a strong $31.5m (£19.4m) and grossed $7.7m (£4.7m) over the past seven days, suggesting it could still provide healthy midweek numbers in the coming weeks despite the presence of Catching Fire.

Starting from today [Nov 25], Rentrak has announced that Event Cinema releases will now be included in the official UK chart, starting with the huge success of Doctor Who: Day of the Doctor on Saturday night [Nov 23] which saw it chart third.

The simulcast 3D outing achieved a superb $2.8m (£1.7m) from its 450 sites on Saturday alone, with figures for its repeat screenings on Sunday unavailable at the time of writing.

Event Cinema releases are anticipated to gross around £20m this year, according to Rentrak.

Fox’s well-received comedy-drama is now up to $14.3m (£8.9m) in the UK and should cross the £10m mark in the coming weeks to become Stephen Frears’ best-ever UK performer.

Sony’s animated sequel is now up to $18.8m (£11.6m) ahead of the arrival of Free Birds this week and Frozen in early December.

The debut is also ahead of director Abdellatif Kechiche’s only other UK outing Couscous (AKA The Secret of the Grain), which recorded a $51,500 (£31,814) opening from 11 sites.

Released in 147 sites through Koch Media, Parkland achieved a UK bow of $181,000 (£111,800) and arguably suffered as a result of limited performances at certain sites given the arrival of The Hunger Games: Catching Fire and the one-off event of Dr. Who on Saturday.