Perspectives on 2020: How Baltasar Kormakur shot for 300 days this year

The Icelandic filmmaker tells Screen about being the first to colour-code on set (but not wanting it to be his legacy) and shooting for 300 days in 2020. 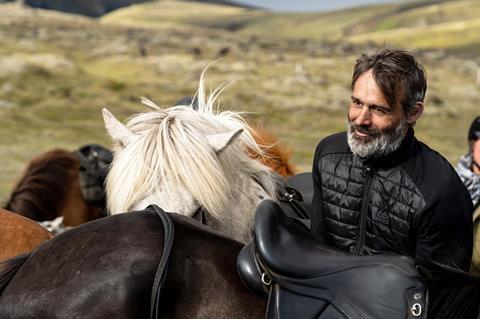 While most of the world went into an initial lockdown that began in March, Baltasar Kormakur had to pause the Icelandic shoot of his Netflix supernatural drama Katla for only two weeks in early April. It helped that the director lives in a country that introduced social-distancing guidelines but has never gone into full lockdown — and that he owns Reykjavik Studios, his own facility. It meant his team were the first in the world to come up with Covid‑19 shooting protocols, such as colour-coding different crew departments.

The veteran director has a wealth of experience across different sizes of productions, from Icelandic features — starting with the Toronto Discovery Award-winning 101 Reyk­javik in 2000 and, most recently, 2016’s The Oath — to action-packed international films such as 2 Guns, Everest and Adrift.

The always-busy Kormakur also started shooting season three of his hit Icelandic crime series Trapped this year, and is developing a feature slate through his own company RVK Studios. He hopes the first to shoot in 2021 will be the survival thriller Beast, starring Idris Elba.

What is your most memorable moment of 2020?
We came to shoot Katla in Vik [a village on the south coast], which is usually the most crowded tourist place in Iceland. And then we showed up and there was not a single soul — it was like 28 Days Later.

My other greatest moment was in mid-summer in the highlands, with my horses, and it was totally empty. But we are ready to welcome back the tourists now.

How have you had to adapt your work?
Instead of giving up, I shot about 300 days this year. It’s all been different, we made changes even before restrictions were in place. After the first spike [in infections], we were the first ones to start shooting again for Netflix. I wanted to do this right, and I didn’t want to be responsible for anyone’s bad health. Even though there were few restrictions when we started, we kept a very strict protocol by colour-coding different areas and keeping people separated. We were also testing everyone.

For another [as yet unannounced] big international film shoot, we were in a bubble for five weeks and isolated from everyone.

The story goes that you had a lightbulb moment about colour-coding crews, inspired by wristbands given to children in Icelandic swimming pools. And now that has been adopted around the world…
The pools are small, so you can only be in for a certain amount of time. When you enter you get a wristband, and they’ll say at a certain hour, “Red wristbands out now’.’ That came to my mind when we were thinking of how to shoot Katla safely. And then The New York Times wrote about it and other governments saw it. We had a woman call from America asking, “What does yellow stand for?” I told her it can be whatever you want!

I don’t want that to be my legacy, colour-coding in Covid [laughs]. But I wanted to keep these crews at work. We had to take a chance, to find the right way.

What about mentally? How did you stay sane this year?
I thrive on challenges. I do everything in my power and then I just bow my head to nature. You have to work your way through it. And I like numbers. I look at every number, how many cases per hundred thousand, I always used logic to work with.

What’s one thing that has been changed this year that you would like to see continue?
I like the fact I can Zoom with everyone around the world, I don’t have to travel to Los Angeles for a meeting. I like that we might actually slow down for a little bit. In some ways, there has been this shift of going back to families, going back to what we value and what is important. But I do expect the world to start turning fast again, I don’t think we are necessarily fast learners. And I can understand that if I was 20, I wouldn’t be as patient as I am. I like change. I like change of power. I like when there’s room for growth and there’s room for invention.

One of the main talking points of the year has been diversity. How do you think the industry can be more inclusive?
People are doing a lot and there is awareness, but we can do a lot more. I’m all for equality and diversity… and tolerance also. The only thing I don’t like is when the situation becomes too politically correct — I don’t want to hear that a man can’t tell a story about a woman, and vice versa. I think too much political correctness is not the friend of art. We can’t just tell our own story; we can tell our own story through other people as well.

Audience habits have also changed due to necessity in 2020. Do you think that’s going to remain in the long term?
Young people are going to flock into cinemas again, because part of going to the cinema is a cultural moment to share with other people. Yet people like my parents probably wouldn’t have got Netflix without this pandemic year. The streamers are reaching people who wouldn’t normally go to the cinema. I feel conflicted when filmmakers get over­excited about where [the audience] is watching the movie. I’m fine as long as the quality is very good and the sound is great. At home with a great screen can be better than a bad cinema. It’s almost like a painter who’s obsessed about where his paintings are shown. The painting should stand for itself, whether it’s in a home or a museum.

You’ve partnered with Netflix for Katla and Trapped season three. What value does that bring?
We get access to the audience that we might not otherwise get access to. Because of the power of the streamers, it’s getting trickier working with some of the broadcasters. Hopefully the two other seasons [of Trapped] will go onto Netflix, and that means more people can have that easy access. It’s not just for business reasons. You put a lot of work into a project, and in the end you want it to be accessible to people. [Icelandic broadcaster] RUV and [German broadcaster] ZDF will have a window in late 2021 and the show will be on Netflix in 2022.

You have been busy with TV this year. What about features?
I’m doing a new movie, Beast with Idris Elba in South Africa, to shoot in spring 2021 for Universal. And I have quite a few other projects I’ve been developing here that I want to direct, one in Icelandic, one in English. And there are opportunities to produce things here in Iceland, because of the studio I built. We’re booking shoots for 2021, and I’m building the offices next to the studio. Things are moving quite fast.

The Icelandic government has released its first long-term film plan. Do you see this as a good thing?
It’s a great thing they have a plan. One of the ministers said film is one of the four pillars of the Icelandic economy. I hope there could be growth in the rebate [for foreign productions, currently at 25%]. There is a lot of opportunity here.

What excites you about the future of the film industry?
There is a change in how we distribute and sell movies, and some middle people might be hurting. I think anything that will shorten the distance between the artist and the audience is for the better. You have to think, “What is the right platform for this story?” I love film, but I love good series as well.