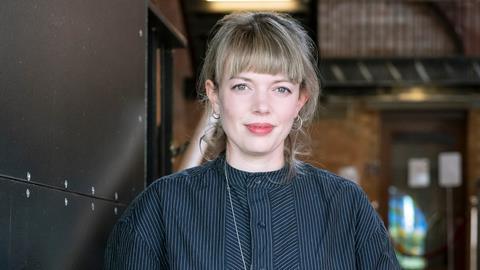 Sinéad Kidao has Mike Leigh to thank for her break into the costume design industry.

She was just graduating from a two-year postgraduate course in theatre costume at the Royal Academy of Dramatic Art in 2010 when she attended a London Q&A event with the filmmaker, and had an opportunity to speak to him.

Leigh was working on 35-minute short A Running Jump, made to tie in with the 2012 London Olympic Games. He connected Kidao (née O’Sullivan) to his regular costume designer Jacqueline Durran, and she was taken on as a costume assistant.

Kidao — who hails from Kildare, Ireland — went on to work in the costume department with Durran on nine features, including Joe Wright’s Anna Karenina, over a 10-year period. She also assisted Lindy Hemming on The Dark Knight Rises and Wonder Woman 1984. But from the very beginning, she was also branching out as costume designer on a series of shorts (“Jacqueline has always encouraged me to do that”), which prepared the ground for her latest work: costume design for two chapters of Steve McQueen’s five-part ‘Small Axe’ anthology series for the BBC; and Emily Mortimer’s three-part adaptation of Nancy Mitford’s The Pursuit Of Love for the BBC and Amazon, which wraps mid-October.

For ‘Small Axe’, Kidao worked on the Red, White And Blue segment, which is set in the 1980s, and Education, set in the 1970s. Both stories are based on real people and in terms of costumes, “It was about telling a story as truthfully and accurately as possible,” says Kidao. “In London at that time, clothing told so much about who a person was, what kind of music they listened to, what area they were growing up in. Recreating that truthfully was incredibly important to us.”

Kidao finds period projects and the research process especially stimulating, and her work with Durran has spanned the centuries: “No two jobs are the same.” But it is not just about finding clothes appropriate to the setting. “It’s all about reading the script and finding out who these people are,” she says. “And then imagining what they would have worn within the parameters of what existed at the time.”