Why more independent filmmakers are turning to podcasts

The growing popularity of podcasts has seen filmmakers experiment with alternative ways to showcase their work. 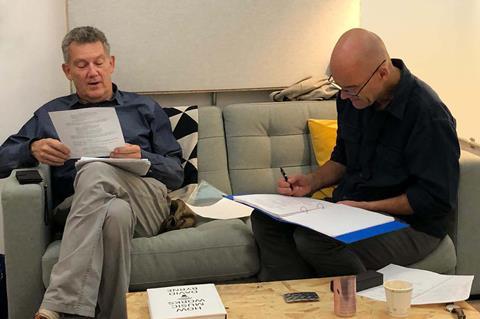 With fewer productions being shot during the pandemic, independent UK filmmakers are increasingly turning to another format — podcasts. Projects that might have taken years and sizeable budgets to bring to the screen are being realised with minimum fuss or expense by simply using sound.

The US has notable examples of dramas that were first produced as podcasts and have since been developed as series or movies. Gimlet Media’s thriller podcast Homecoming began as a weekly audio drama starring Catherine Keener and Oscar Isaac, but was later developed as an Amazon series starring Julia Roberts, Bobby Cannavale and Sissy Spacek.

Now, in the UK, feature-length scripts by established screenwriters and newcomers are being showcased by production company The Script Department, which describes their audio dramas as “cinema for the ears”. One writer/director experimenting with the format is filmmaker Stuart Urban (Preaching To The Perverted) with war drama A Ball In The Brain.

“[The Script Department] package it like a little movie campaign,” says the Bafta winner of how his feature script was adapted into a podcast. A Ball In The Brain is the true story of how General Charles George Gordon travelled to Sudan in the mid-1880s to suppress an Islamist uprising but was slain by the Mahdi forces after a lengthy siege. Urban wrote it as a film but had yet to get it greenlit. “It’s nice to have the work produced,” he says. “It’s a validation of your work.”

The cast was led by Pip Torrens, known for his roles in Netflix drama The Crown and Poldark, and the production was made available on all major podcasting platforms.

“The thing about being a screenwriter is that, unless your stuff gets made into a film, people don’t ever really get to experience what you wrote,” says John Finnegan, who founded The Script Department in early 2019. “We want to capitalise on the cinematic nature [of the script] and showcase it in a way that will be very familiar to audiences. We create movie trailers, for example, using footage and clips from the reading, as well as posters and marketing.”

Nobody is pretending the UK’s new wave of “audio movies” are lucrative. They are made on modest budgets, often using the Kickstarter funding platform, and Urban suggests that experienced writers would expect to earn a third or even a quarter of what they would receive for scripted drama for film or television.

But these podcasts can reach thousands of listeners and provide work for actors as well as screenwriters. They also grant creative freedom to the writers.

London-based Towton Productions is another outfit exploring audio drama alongside its more conventional film and TV work. The company recently optioned the Kingmaker series of UK historical novels by Toby Clements, set during the 15th-century War of the Roses. The initial aim was to adapt the first book, Winter Pilgrims, for the screen.

“We were pitching that around,” says Towton managing director Kevin Moorhouse. “That made its way to Amazon and they referred us to Amazon Audible, who asked us to do a sample adaptation of our screenplay for audio.”

Moorhouse was initially hesitant. “But the more we got into it, it dawned on us how much more feasible it was to produce an audio [drama] over a massive screenplay idea,” he recalls.

In the end, no deal was struck with Amazon but Towton continued to develop the project. Working together with Fiona McAlpine of Allegra Productions, Towton recorded the audio drama last year — between lockdowns — at Leiston Abbey in Suffolk. There were 29 actors and 11 support crew.

Towton is pushing ahead with its next audio drama project, Whisky Wars, about Scottish whisky being smuggled into Chicago during prohibition. This will be recorded in the US, with actors working remotely.

If the audio productions work successfully, Moorhouse says it will give the company “a much better chance” of doing what they originally planned — making the projects into TV drama series or feature films: “It can be a stepping stone.”