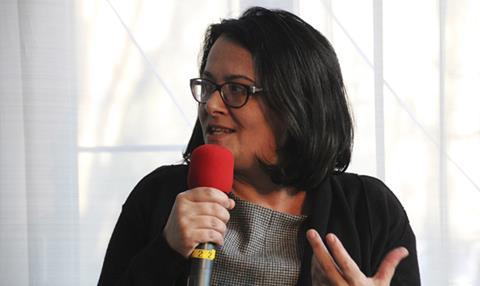 Belgrade was the focus of a co-production meeting with a difference last weekend when the FEST Forward Industry Meetings (March 4-6) focused its public pitchings on projects by and about women.

“We decided that the focus should be on the situation of women in the film industry and gender equality because this issue is of particular importance for us in ex-Yugoslavia as well as other parts of the Balkans,” said the event’s managing director Miroslav Mogorovic.

Ten projects were selected for public pitchings ranging from Serbian first-time director Milica Tomovic’s The Last Goodbye, a romantic love story about a young urban couple in a long-distance relationship between Belgrade and Berlin, to Croatian directorial duo Marina Andree Skop and Drazen Zarkovic’s children fantasy adventure My Grandpa Is An Alien and Macedonian filmmaker Marija Dzidzeva’s drama The Victim (aka Sacrifice) set on the edge of the civil war in 2001.

The line-up of pitches also included Vanja Kovacevic’s documentary Supernova portraying the world of the music industry through the life and work of Brian Rasic, the official photographer of the Rolling Stones, the Montenegrin production Hotel Boka by Marija Perovic, which follows the life of the heroine Ana from the hotel’s opening in Herceg Novi in 1913 to its destruction by an earthquake in 1979, and the debut As Long As Heaven Allows by Armenian director Tamara Stepanyan, one of the first projects to be developed by Alice Ormières’ Paris-based Surprise Alley which she set up with Mogorovic and Germany’s Titus Kreyenberg at the end of 2013.

The event wrapped on March 4 with a small showcase of works in progress including actress-director Bojana Novakovic’s documentary The Forbidden Aunt for SENSE Production and Lee Filipovski’s feature debut, the comedy drama Flafi, as a co-production between Canada’s Filmbaker Pictures and Belgrade-based Cineplanet.

The feedback for this new initiative was particularly encouraging for the organisers who had managed to attract industry including ZDF/Arte’s Meinolf Zurhorst, French-based producer Cedomir Kolar, German film funders Manfred Schmidt and Brigitta Manthey, Eurimages project manager Susan Newman-Baudais and Aleksandar Govedarica of the distributor/sales agent Syndicado to Belgrade as potential partners for the projects.

“I was pleasantly surprised by the quality of the projects from the women directors and screenwriters,” Sanja Ravlic of the Croatian Audiovisual Centre (HAVC) said.

Wearing her other hats as Croatia’s national representative to Eurimages and the president of the pan-European fund’s working group on gender equality, Ravlic pointed out that the focus of FEST Forward “is important to bring this issue of gender equality into the public eye and the pitches showed that there is a real wealth of talent here in the region. What was done here really fits into the strategic goals of our Eurimages working group and I will be reporting about it to my colleagues at our next meeting in Tirana this week.”

She pointed out that much progress has been made on addressing the gender imbalance since the founding of the HAVC in 2008.

“That year, a roundtable was held ahead of the national film festival in Pula on “Visibility of Women in Croatian Cinema” and when the numbers were revealed, people were appalled because, in the period between Croatia’s independence in 1991 and 2008, only 5 of the 100 or more films produced were directed by women.”

Once it had begun operations, the HAVC introduced a separate production funding scheme for first-time directors of feature-length films with a statutory obligation to support at least one debut feature a year.

As part of its proactive strategy for gender equality, the Croatian fund was also one of the supporters of the two-year research study ‘Where are the women directors in European films?’ which was organised by the European Women’s Audiovisual Network (EWA).

According to figures collated by the HAVC for the EWA report, which will be published in full at the end of March, Croatian women filmmakers have definitely benefitted from the separate scheme for debut features.

In other findings on the challenges faced by female directors, Croatian respondents gave the highest ratings (64%) to “job instability” and “competitive struggle to secure funding” (62%), followed by “family commitments” and “lack of self-confidence.”

The focus on women in film will be continued at the next edition of FEST Forward in 2017, according to Mogorovic, with the works in progress section also being exclusively dedicated to projects by women directors and producers.