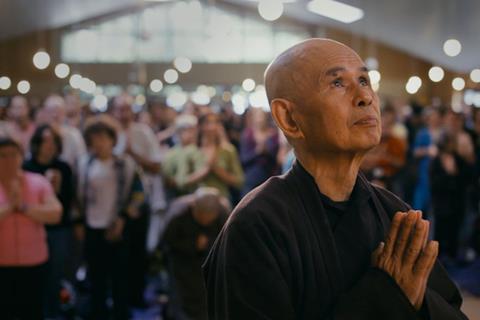 Benedict Cumberbatch-narrated mindfulness documentary Walk With Me is proving a hit with theatre on demand (TOD) audiences in the US.

According to its US distributor Gathr the film has banked more than $250k in theatrical on demand presales ahead of its expansion release on September 12.

The film has 194 confirmed theatre on demand screenings with another 250 pending screenings still working to meet the minimum reserves threshold.

“We are currently tracking to be in the top 20 documentaries released in the US this year,” said Gathr president Jake Craven.

“Walk With Me has had one of the strongest theatrical on demand openings to date and puts the film in line to be one of the top 10 all-time crowd-sourced theatrical releases,” he continued.

Shot over three years, Walk With Me goes deep inside a Zen Buddhist community which practices the art of mindfulness with their famous teacher Thich Nhat Hanh.

Footage of the monastic life is paired with Cumberbatch reading from insights from Thich Nhat Hanh’s early journals.

Well-sold for WestEnd Films, the film was picked up jointly by Kino Lorber and Gathr for the US.

The latter has led both the traditional theatrical and TOD bookings on the campaign.

The film began its traditional run on August 11 in San Rafael at the Smith Rafael Film Center for a week before adding engagements in New York City at the Rubin Museum of Art and Boulder at the Dairy Center For The Arts. During those first three runs, the film grossed $20,000 in New York, $13,000 in San Rafael and $12,000 in Boulder

Its limited release still garnered it a top ten screen average among US releases in its first two weeks and Gathr now intends to broaden its traditional run.

“In many cities, we have turned down requests from theatres for traditional engagements because we already have many sold out Theatrical On Demand events in that market,” explained Craven.

“Where there is an apparent gap on the map, we either put out a call for someone on the ground to sign up to host a Theatrical On Demand screening, or we contact a local theater to discuss securing a traditional engagement.”

“While other films have used both traditional theatrical engagements and theatre on demand in the past, what makes this release unique is that for the first time Theatrical On Demand is not being treated as the ugly step sister. We are weighing crowd sourced screenings on equal footing with traditional engagements using our analytics to determine the best opportunity in each market.”

“Ultimately, this is allowing the overall theatrical release to scale with a level of efficiency rarely seen with an independent nationwide release like this. Additionally, what’s exciting is that this is just the start of the campaign and as word spreads so will the release. We are currently adding roughly 20 new Theatrical On Demand screenings a day.”

The film’s co-directors Max Pugh and Marc J. Francis added: “Speakit Films created a hybrid theatrical release model fusing a limited traditional theatrical run with a theatrical on demand release with Gathr Films so audiences outside of the major US markets can see Walk With Me in cinemas.

“We also designed an innovative social media campaign which ran throughout the production of the film and which rapidly gained passionate and active engagement from the fans of the movie.”