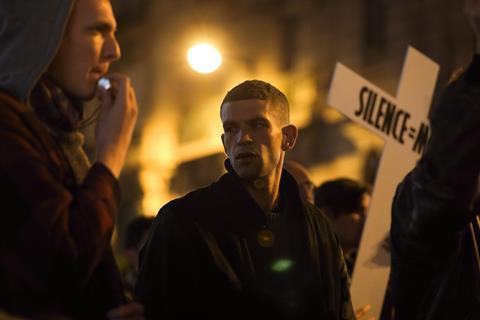 Scroll down for the key nominations

France’s Academy of Cinema Arts and Sciences unveiled the nominations at its traditional news conference at the Le Fouquet’s restaurant on the Champs-Elysées.

The popularity of Campillo’s film among the academy’s members came as little surprise. Although ignored by Oscar and Golden Globe, the Cannes Grand Prix winner has been a critical and box office success in France where the film has drawn more than 800,000 spectators for Memento Distribution.

It also leads the nominations in the upcoming Lumière awards, France’s equivalent of the Golden Globes.

Other leading César contenders included Albert Dupontel’s lavish post World War One drama See You You There, with 12 nominations, Mathieu Almaric’s tribute picture Barbara, which made it into nine categories, and feel good wedding reception comedy-drama C’est La Vie! by Eric Toledano and Olivier Nakache, and Hubert Charuel’sBloody Milk, with eight nominations each.

Charuel’s rural drama about a young farmer battling to save his herd of cows after it is struck by a contagious disease is among a number of first features making it into the Cesar nomination lists this year.

The director, who has only ever been nominated once in the awards, was widely tipped to make it into the final round of the Césars with her Cannes Directors’ Fortnight winner Let The Sunshine In.

Juliette Binoche did, however, get nominated in the best actress category for her performance in the film.

There was also not a single nomination for Luc Besson’s sci-fi Valerian And The City Of A Thousand Planets, one of the most successful French films at the local box office this year.

The picture also missed out on the academy’s new Le César du Public award, aimed at the French film with the biggest box office at home, which went to Dany Boon’s Raid Special Unit, which drew roughly 4.5m spectators, some 500,000 more than Valerian.

This year, 642 films were eligible for nomination including 234 titles in the categories aimed at French cinema, 372 films in the best foreign film category and 36 shorts.

Films in the running in the foreign film category include Dunkirk, The Royal Exchange, Loveless andThe Square,

A total of 2,890 academy members, accounting for roughly 60% of its 4,680 membership, voted in the nomination round.

The 43rd Cesar ceremony will take place in the Salle Pleyel in Paris on March 2 with actor Manu Payet acting as master of ceremonies and actress and performer Vanessa Paradis as president of the event.

As previously announced Spanish actress Penélope Cruz will receive an honorary Cesar at the ceremony, following in the footsteps of George Clooney, Kate Winslett and Michael Douglas.

Academy president Alain Terzian noted that as well as feting contemporary French cinema the ceremony would also recall the stars who had passed away in 2017 including Jeanne Moreau, to whom the event will be dedicated, as well as Mireille Darc, Danielle Darrieux, Claude Rich, Jean Rochefort and Johnny Hallyday.