Burning, Lee Chang-dong’s drama based on a short story by Haruki Murakami, has finished top of Screen’s Cannes 2018 jury grid with a record score of 3.8 out of 4. 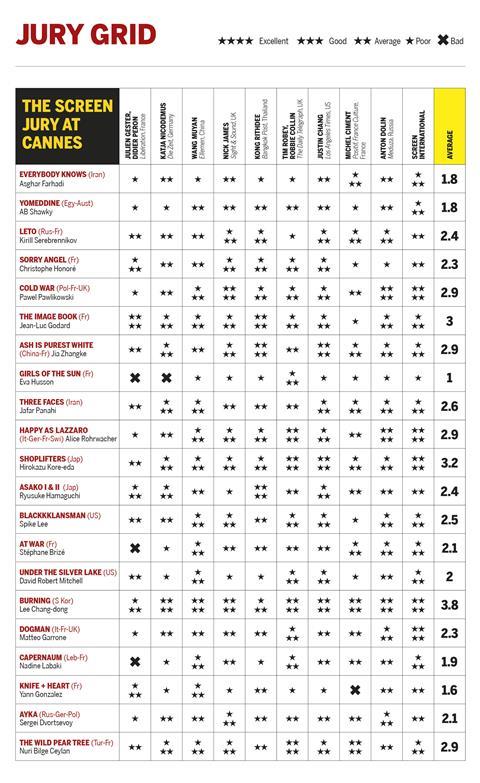 Described by Screen’s review as ’quietly devastating…a film of wondrous complexity and inscrutability’, the film centres on a lost young man, the woman he falls for, and a stranger with unknown motivations. It received top marks from eight of the ten critics on the grid and 3 from the other two.

The 3.8 average is the highest score in the history of the Screen Cannes jury grid, surpassing the 3.7 for Maren Ade’s Toni Erdmann set in 2016.

The second highest score, of 3.2, was achieved by Hirokazu Kore-eda’s Palme d’Or-winning Shoplifters, about an alternative family who are living on their wits. The latest film from Jean-Luc Godard, a compilation piece of images and texts called The Image Book, took third place with 3.0.

The lowest score recorded this year was for Eva Husson’s Girls Of The Sun, about a batallion of female Kurdish fighters taking on ISIS, which registered a disappointing 1.0 average. Above that, Yann Gonzalez’s Knife + Heart landed at only 1.6, and the first two titles from this year’s Competition, Asghar Farhadi’s Everybody Knows with Penélope Cruz and Javier Bardem and Egyptian leper story Yomeddine, both scored a low 1.8.

The average mark for this year’s Competition titles was 2.4, suggesting a quaity of overall programme midway bettween ‘average’ and ‘good’.