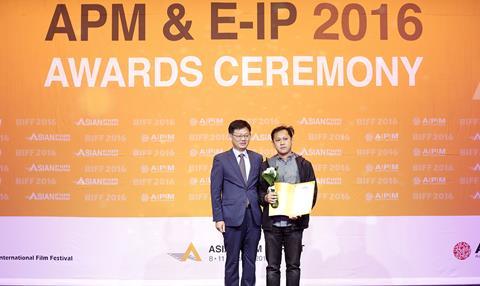 Indonesian director and Busan regular Edwin (Postcards From The Zoo) picked up the Asian Project Market (APM)’s top Busan Award with his Love And Vengeance.

Sponsored by Busan Metropolitan City, the award comes with a $15,000 cash prize.

Based on a bestselling novel, Love And Vengeance follows a man trying to deal with life and love after being traumatized into impotency by violent events he witnessed at the age of 12.

The film is currently in pre-production. Meiske Taurisia, Lorna Tee and Muhammad Zaidy are attached as producers.

Neang Kavich’s Cambodia-France co-production White Building picked up the CJ Entertainment Award of $10,000 - which also gives the Korean company a first-look option, and the Arte International Prize, with €6,000 ($6,650).

White Building, which has Diamond Island director Davy Chou attached as a producer, tells the stories of three teenage boys and their neighbors in an inner-city tenement building in Cambodia.

The project is currently in script development.

From MONEFF with $30,000 in post-production services and facilities, especially editing or VFX.