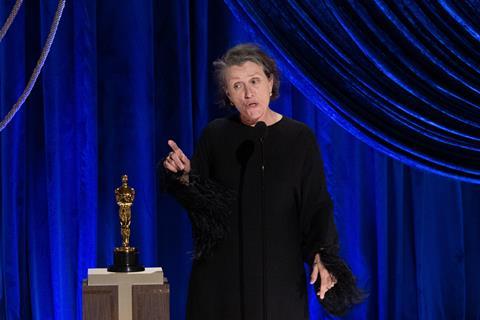 The 93rd Academy Awards on Sunday delivered an all-time ratings low as an estimated 9.85m viewers tuned in to the ceremony on ABC, according to early date released on Monday (April 26).

The number from Nielsen represents a 58.3% drop against last year’s 23.64m viewership total.

Sunday’s show drew a 1.9 rating among the key 18-49 demographic, resulting in the lowest score ever. A good show rating typically falls in the 2-2.9 range.

The Oscar still ranks as the most watched awards show of the season. Nieslen will issue final numbers on Tuesday.

Anthony Hopkins won best lead actor for The Father, while supporting actor awards went to Daniel Kaluuya from Judas And The Black Messiah and Yuh-Jung Youn of Minari.