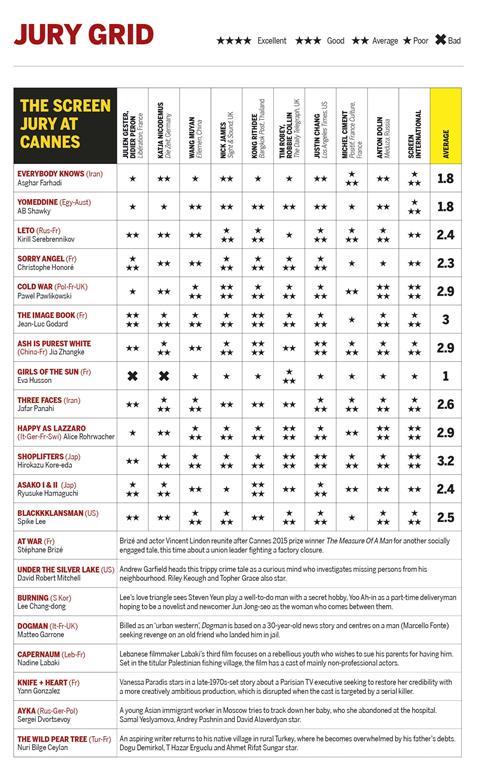 The ensemble piece, about an alternative family forced to live on its wits, took top spot with an average of 3.2. It received no lower than a 2 from any critic, with top marks from Tim Robey and Robbie Collin of The Daily Telegraph, Justin Chang of the LA Times and Screen’s own critic.

Alice Rohrwacher’s Happy As Lazzaro took a mix of marks for an average of 2.9, currently enough for joint third position on the grid. Set in a ramshackle village in rural Italy and following a commune of sharecroppers, the film took 4s from Tim Robey and Robbie Collin, Meduza’s Anton Dolin and Screen’s own critic, but was weighed down by a 1 from Julien Gester and Didier Péron of Libération.

Also appearing on the grid is Asako I & II, Ryusuke Hamaguchi’s story of two lovers who are physically identical to each other. The mode for this title was 2, but 3s from Justin Chang, Julien Gester and Didier Péron and Die Zeit’s Katja Nicodemus, plus a 4 from the Bangkok Post’s Kong Rithdee lifted it to a 2.4 average.

The next two grid titles are Stephane Brizé’s At War starring Vincent Lindon, and Andrew Garfield in David Robert Mitchell’s Under The Silver Lake.