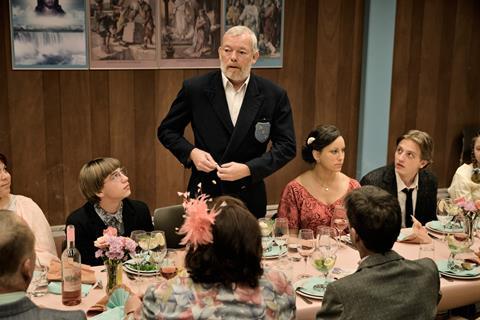 LevelK has boarded world sales rights to Henrik Ruben Genz’s satirical comedy-drama Word of God, ahead of the film’s international premiere at the BFI London Film Festival in the Laugh section.

Soren Malling, best known for The Killing, Borgen and A Hijacking, stars as a dominant patriarch – and self-appointed ‘god’ of the family – in 1980s suburban Denmark.

“Word of God is both a grotesque and affectionate story about a strange God, who becomes human. A story about a mature man, who through his death sentence realizes that he has lived the wrong life,” Genz said.

Genz’s previous credits include TV series Nikolaj & Julie, Better Times and The Killing, and films such as Terribly Happy.

Signe Leick Jensen and Morten Kaufmann produce for Toolbox Film, in co-production with Deluca Film and with production funding from the Danish Film Institute. Partners also include TV 2 and the West Danish Film Fund.

LevelK will also be selling Word of God at Busan and MIPCOM later this month.