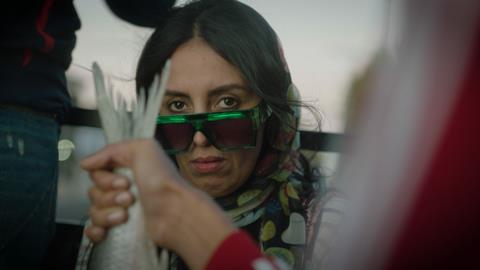 Egypt’s El Gouna Film Festival (October 14-22) has unveiled the selection of 20 projects in development and post-production from Arab filmmakers to be showcased at the fifth annual CineGouna Platform.

The platform will run from October 16-21.

The 13 projects in development include Algerian filmmaker Sofia Djama’s second feature A Quarter To Thursday In Algiers, about a woman whose plans to deal with an unwanted pregnancy are derailed by other life events.

Djama’s debut film The Blessed  made its world premiere in Venice’s Horizons line-up in 2017, winning the Brian Award and Lina Mangiacapre prize as well as best actress for Lyna Khoudri.

Other narrative feature projects include Tunisia director Ala Eddine Slim’s drama Agora, about a remote town where missing people return after many years, leading to rising tensions as fear sets in.

It is Slim’s third solo feature after Tlamess, which debuted in Cannes Directors’ Fortnight in 2019, and The Last Of Us, which won the Luigi De Laurentiis award for best first feature in Venice in 2016.

Moroccan filmmaker, writer and artist  Hicham Lasri will present Happy Lovers about a penniless novelist who plans to assassinate a famous author in response to a fatwa for the reward money alone.

Documentary projects in development include Oscar-nominated Syrian documentarian Talal Derki and Ali Wajeeh’s joint work A Song For Summer And Winter, about a group of women who come together to write a play about how difficult it is to be a woman in Syria today, after 10 years of war.

In the post-production selection, prolific filmmaker Lasri will unveil also first images from his new narrative feature Haysh Maysh: False Drama about an angry woman struggling to survive in a post-apocalyptic Casablanca.

The platform will also showcase the guest project Under The Fig Trees by Tunisian-French filmmaker Erige Sehiri, following its win of the El Gouna Film Festival prize at the Final Cut in Venice workshop earlier this month.

Documentaries in post-production include US-Palestinian multi-disciplinarian artist Hind Shoufani’s They Planted Strange Trees, exploring the complexity of what it means to be an indigenous Arab Christian living in the now Israeli region of the Galilee today.

A cash prize of $15,000 and a CineGouna Platform certificate will be awarded to the best film in post-production and the best project in development. The participating projects are also eligible for a host of other grants funded by GFF’s sponsors and partners.

GFF festival director Intishal Al Timimi said, “CineGouna Platform is an indisputable testament to GFF’s commitment to include powerful stakeholders in the Egyptian and Arab film industries. We are overjoyed that CineGouna continually attracts the Arab world’s most motivated filmmakers and has become a focal point that unceasingly launches film initiatives throughout the MENA region.”

A Quarter To Thursday In Algiers (Algeria)
Dir. Sofia Djama

A Song For Summer And Winter (Syria)
Dir. Talal Derki and Ali Wajeeh

Nothing About My Mother (Tunisia)
Dir. Latifa Doghri