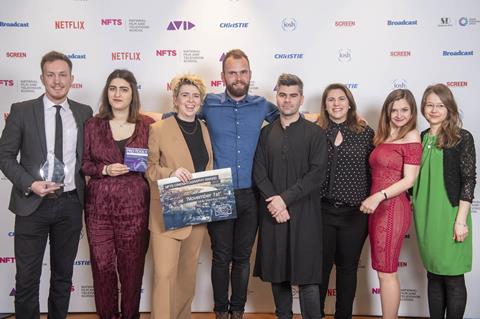 The UK’s National Film and Television School (NFTS) has held its 2019 Graduation Showcase, awarding prizes to graduating students and celebrating their work of the last 12 months.

The Showcase took place at Picturehouse Central in Soho, London on from Monday 25-Wednesday 27 February, followed by the graduation ceremony at ODEON Leicester Square on Thursday.

The ‘Most Promising NFTS student’ award was given to graduating composer Will Turner. NFTS head of composing John Keane said, “Will stands out for his excellent attitude to everything he does. He is a talented composer on a quest to understand his vocation more profoundly, which is demonstrated by his willingness to experiment and take risks.”

The cinematography prize was awarded to graduating cinematographer Molly Manning-Walker for her work on November 1st. The jury for the award commented, “Molly’s camera work was very much in sync with the pace and the momentum of the action. There were thoughtful moments of stillness, where the composition of the shot allowed space around the characters to be more reflective; and then there were moments of greater intensity where the camera moved with the actors and followed their faces closely.”

As previously reported, the honorary fellowship award was presented to Amma Asante, director of films including Belle and A United Kingdom.