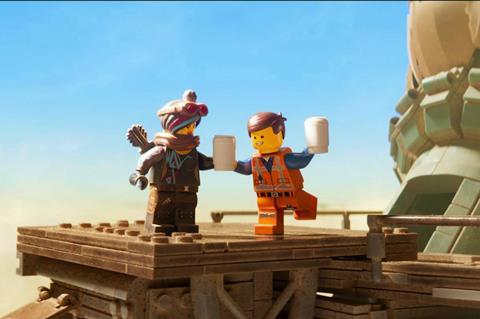 ‘The Lego Movie 2: The Second Part’

The biggest opener was Hans Petter Moland’s revenge thriller Cold Pursuit, starring Liam Neeson, which grossed £630,967 from 418 sites. The film is the English-language remake of Moland’s own In Order Of Disappearance but its release has been marred by controversial racist comments made by Neeson on the film’s campaign trail.

Sean Anders’ comedy Instant Family, starring Rose Byrne and Mark Walhberg, was at number two for the second week running with a weekend gross of £1.67m from 562 sites. It has now grossed £6.4m to date.

It was only slightly ahead of How To Train Your Dragon: The Hidden World which took £1.66m from 650 sites and has grossed £15.9m after four weeks on releases.

Number four in the chart was held again by manga adaptation Alita: Battle Angel which grossed £870,704 from 478 sites. It has now taken £7.7m after four weeks on release.

Joe Cornish’s The Kid Who Would Be King harnessed the half-term audience to move into the top five in its second week on release with a three-day gross of £651,610 from 512 screens to hit a cume of £2.6m. It is produced by Big Talk and Working Title Films.

Fox opened Bollywood adventure comedy Total Dhamaal, the third title in the Dhamaal series. It notched up the biggest opening of the series so far with £250,601 from 81 sites.

Award-winning Bohemian Rhapsody added £209,037 from 297 sites on its 18th week on release to take it to £53.7m to date. The Favourite, starring BAFTA and Oscar best actress winner Olivia Colman, added £169,548 from 296 screens. Yorgos Lanthimos’ period comedy has now grossed £15.7m after eight weeks on release.

Multi-Independent Spirit winner Can You Ever Forgive Me?, directed by Marielle Heller, played at 120 sites to gross £90,822 over the weekend. It has now grossed £1.7m to date.

eOne Distribution opened Mimi Leder’s Ruth Bader Ginsberg biopic On the Basis Of Sex at 453 sites where it grossed £457,560 over the weekend. It stars Felicity Jones as the young Supreme Court justice.

Barry Jenkins’ If Beale Street Could Talk, which won the best picture prize at the Independent Spirit awards and best supporting actress for Regina King at the Oscars, grossed £135,196 at 327 sites. It now has a cume of £1.2m

Foreign-language Bafta- and- Oscar-nominated Capernaum grossed £85,090 from 48 sites for a £1,773 site average. With previews it has now taken £140,769 to date. Capernaum is directed by Lebanon’s Nadine Labaki, the only woman feature director to be nominated for an Oscar this year. The film about a young Syrian refugee in Beirut debuted in Competition at Cannes 2018 where it won the jury prize.

Picturehouse plans to widen the release to a further 20 sites from Friday March 1 due to strong word of mouth.

Neil Burger’s The Upside, a US remake of French hit Intouchables, starring Bryan Cranston, grossed £13,610 from 50 sites for a gross of £2.2m so far.