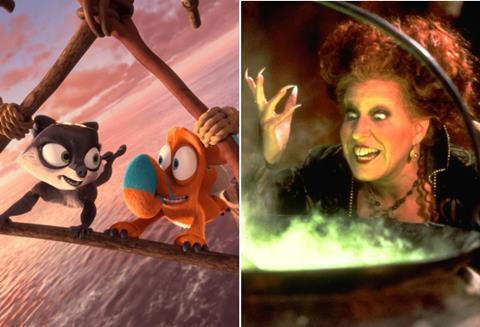 eOne’s Two By Two: Overboard! has floated to the top of the UK box office while a re-release of 1993’s Hocus Pocus scored second place over the Halloween weekend.

The cumulative total for the top five films from October 30 to November 1 was £770,274, which is down on the previous weekend’s £800,325 but remains a respectable amount given that social distancing measures remain in place and cinemas in Ireland, Northern Ireland and Wales are closed.

The next round of box office figures will be significantly diminished as cinemas in England will be forced to close from Thursday (November 5) until December 2 as part of a second national lockdown. Cinemas in Scotland will also be closed from today due to Covid-19 restrictions.

Animated feature Two By Two: Overboard! opened on October 23 in second place but has risen to the top spot with takings of £190,761 from 337 locations for a £575 location average. Including previews dating back to mid-October, it has now taken a total of £955,370.

The family adventure, produced by Ireland’s Moetion Films, is a sequel to 2015’s All Creatures Big And Small, and is also known by the title Ooops! The Adventure Continues.

Also rising up the chart was Park Circus’ re-release of Hocus Pocus. The 1993 family fantasy feature, starring Bette Midler, rose to second place with takings of £186,063 from 305 locations and secured a £646 average. This is up 247% on the previous weekend, when it ranked eighth, and has taken £446,297 after four weeks on release.

Topping the new releases was Blumhouse’s The Craft: Legacy, which took £113,000 from 264 locations. The US supernatural horror is a sequel to 1996 cult classic The Craft, which grossed £3m through Sony International.

Curzon Artificial Eye released Josephine Decker’s Sundance 2020 thriller Shirley starring Elisabeth Moss into 53 locations, grossed £28,403 and an average £568. Including previews, it has a total of £48,770.

The distributor also broadcast US political documentary Boys State into 26 cinemas via a satellite event on Thursday (October 29), with takings of £2,226.

BFI Distribution opened UK drama Mogul Mowgli, starring Riz Ahmed, in 79 locations and took £19,613. Including previews at the BFI London Film Festival, the film has a cume of £32,591.

Wildcard Distribution conducted a limited release for Irish animation Wolfwalkers, taking £18,823 from 71 locations. It has a total of £31,507.

Benjamin Ree’s documentary The Painter And The Thief opened in eight locations through Dogwoof, taking £3,107, while Scottish football manager documentary The Three Kings opened on November 1 through National Amusements and took £2,842 from 55 sites.

Sovereign Films opened Melina León’s Song Without A Name at two locations, taking £714. A planned UK tour of the film in November will be impacted by the imminent closure of cinemas in England.

Universal’s romantic drama All My Life added £25,253 on its second weekend for a cume of £128,991, while young adult romance After We Collided continued strongly for Shear Entertainment, adding £36,727 on its ninth session for a total of £3.96m.