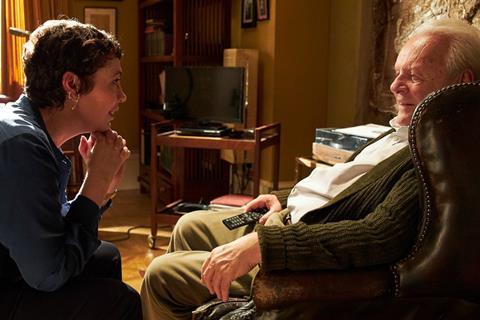 Oscar-winning drama The Father is set to receive the widest theatrical release in the UK and Ireland since cinemas began reopening last month.

This weekend, Lionsgate will release Florian Zeller’s acclaimed feature in 637 screens, including more than 50 in Ireland and Northern Ireland.

Not only is this the biggest release since pandemic restrictions were relaxed, which allowed cinemas to resume business from May 17, but also marks Lionsgate’s fourth widest release to date – behind just Military Wives, The Personal History Of David Copperfield and Knives Out.

The Father is the debut directorial feature of France’s Zeller and is based on his own stage production, with the English-language screenplay co-written with Christopher Hampton.

Anthony Hopkins stars as a man with dementia who refuses assistance from his daughter, played by Olivia Colman. Hopkins’ performance won him both the Academy Award and Bafta for best actor, while the script also won both trophies for best adapted screenplay.

The film has taken close to $11m worldwide to date, including $2.1m in the US, where it was released by Sony Pictures Classics; $2.25m in France, handled by UGC Distribution; and $2.3m in Australia, distributed by Sharmill Films.

Lionsgate will begin previewing action-comedy sequel The Hitman’s Wife’s Bodyguard from Monday (June 14) ahead of release next weekend.

Universal will be offering an alternative to The Father with action thriller Nobody, starring Better Call Saul’s Bob Odenkirk. The US thriller, from Russian director Ilya Naishuller, is penned by John Wick creator Derek Kolstad. It will receive a wide release across the UK and Ireland.

The film, in which a seemingly ordinary man becomes the target of a drug lord, has grossed nearly $60m worldwide to date, of which $26.1m has come from its US release through Universal Pictures.

ICO and Studiocanal will co-release Mandabi, a 4K restoration of Ousmane Sebène’s 1968 film, with 35 sites confirmed to screen the film to date.