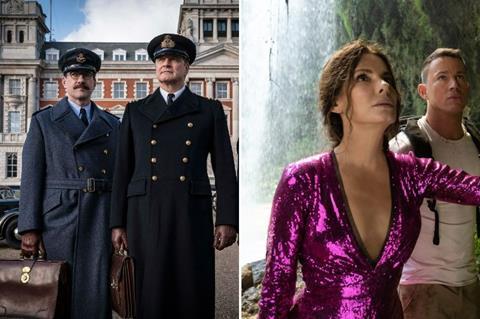 Hoping to plot its way to the top of the UK-Ireland Easter weekend box office is John Madden’s World War II drama Operation Mincemeat, which Warner Bros is opening with a very wide release of 657 sites.

Keen to match its success at the global box office last weekend is Paramount’s The Lost City, which opens in 613 locations.

The comedy adventure, headlined by Sandra Bullock and Channing Tatum, was last weekend’s highest new entrant at the global box office where it grossed $34.7m (£27m) from 17 territories.

The SXSW premiere is directed by Adam and Aaron Nee follows a romantic novelist who winds up trapped in the jungle with the model from the front cover of one of her books, in search of mysterious treasure. Daniel Radcliffe and Brad Pitt also star.

Other comedy adventures of recent times to make respectable debuts at the box office include Free Guy, which topped the box office in its opening weekend taking £2.39m from 625 locations in August of last year, plus Jungle Cruise, which took £2.24m back in July in its first weekend, from 580 locations.

The Northman will open for Universal in 530 locations. Robert Eggers directs this epic about a Viking prince wishing to avenge the death of his murdered father. It is based on the same Scandi legend that Shakespeare’s Hamlet is said to have been modelled on. Alexander Skarsgård, Nicole Kidman, Björk and Anya Taylor-Joy star.

Blue Finch Films will also be re-releasing Terry Gilliam’s Lost In La Mancha to mark the film’s 20th anniversary, for a limited release.

Another anniversary re-release comes from Park Circus, who will celebrate the 60th anniversary of Dr. No by playing the Sean Connery Bond film in 195 sites in the UK, and 11 in Ireland.

Dogwoof’s Navalny will also have its first weekend at the UK-Ireland box office, having been released on Tuesday (April 12), and will be playing in 10 locations. The documentary is an investigation into the assassination attempt against Russian opposition leader Alexei Navalny – a fierce critic of the Vladimir Putin regime.

Sovereign Film Distribution is putting out the 2021 winner of the Venice Horizons Special Jury prize for best film, The Great Movement, at four sites. The Spanish-language title is set in Bolivia, and follows three out-of-work miners struggling in La Paz. Kiro Russo directs.

Third Window Films releases Arthur Harari’s Cannes Un Certain Regard title Onoda: 10,000 Nights In The Jungle in five locations. It focuses on the true story of a Japanese soldier posted to the Philippines in the Second World War who refused to surrender until 1974.