”[An Act of Defiance is] a powerful and important film that aims to correct the record in relation to this key moment in South Africa’s history,” Simon Chinn said.

”Compellingly told, accessible, and with fine performances this is a film which we hope will bring a little known aspect of the anti-Apartheid struggle to a broad international audience.” 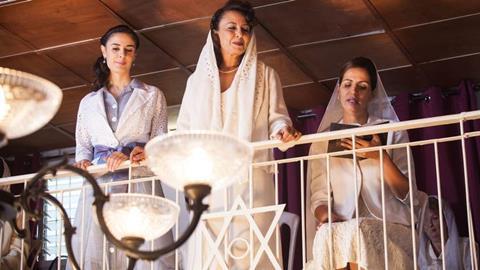 The award was presented halfway through the festival to Nehama by Nik Powell, head of the jury, at the Centrepiece Gala screening of 1945 by Ferenc Töröc.

Nik Powell said of The Women’s Balcony: “Fresh, powerful and funny, the jury agreed that this was a story that was at once highly specific and universal. A film set within a close-knit, conservative Jewish community in Jerusalem but whose story might equally be told anywhere about any community. Full of warmth and gentle humour and with expert use of classical story telling devices it was a pleasure to spend time with these characters.”

“The impetus behind the creation of the Best Screenplay Award was to recognise and honour outstanding screenplay writing, which is so often overlooked,” Lee said. ”I am very proud to be able to give this award as the sponsor and that this is the Award’s first year.”

The UKIJFF Closing Night Gala screening of Past Life by Avi Nesher was accompanied by the announcement of further award winners.

Muhi: Generally Temporary (Rina Castelnuovo-Hollander and Tamir Elterman) and Land Of The Little People (Yaniv Berman) were given special commendations by the jury.