Top brass at the effects and feature animation studio said on Monday the 54,000 sq ft Canadian hub – backed by Québec’s investment arm, among others – will get nine features into production and create 500 permanent jobs by 2020. 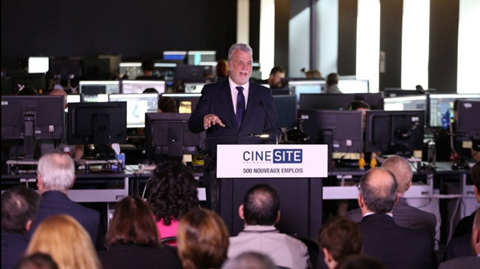 Investissement Québec is advancing a loan of C$2.4m (USD 1.8m) to support the creation of infrastructure and an additional loan guarantee of C$19.6m (USD 14.7m) towards an anticipated overall budget of at least C$90m (USD 67.3m) is being advanced to Cinesite to help finance the first three films.

Comic Animations will join SPA Studios and Atresmedia Cine on Klaus. Sergio Pablos wrote and will direct and Jinko Gotoh will produce the Canada-Spain co-production.

Cinesite launched in London in 1991 and opened an effects and animation studio in Montreal in 2014. Last July it merged with the Vancouver-based Image Engine Design Inc to expand the footprint to 650 artists and technicians in 60,000 sq ft feet of facilities before Monday’s announcement.

Couillard said the investment acknowledged the “talent, creativity and quality of Québec’s labour force and the importance of Montréal as a world player in this industry.”

“Drawing on the sophisticated techniques developed over the last 20 years in the visual effects industry, we wanted to build a new creative home for the world’s best storytellers, writers, directors and animators,” said Eamonn Butler, Cinesite’s head of animation. “Whether you are an established filmmaker or an emerging writer, we want you to think of our studio as a new destination where your work can be nurtured and flourish.”