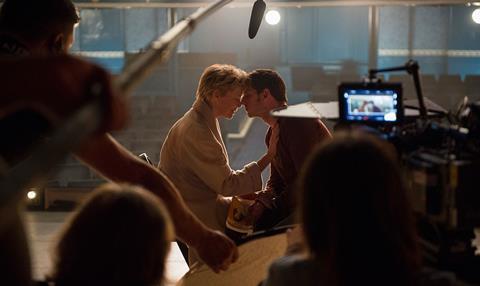 Bening stars alongside Jamie Bell (Billy Elliott) in the true story of the young Liverpudlian actor Peter Turner who fell in love with the older Hollywood actress Grahame, an Oscar-winner known for performances in Crossfire, The Bad And The Beautiful and Oklahoma!

The duo’s bond intensified after Grahame was diagnosed with terminal cancer and went to stay with Turner’s family home in Liverpool.

Broccoli of James Bond producer Eon and Synchronistic Pictures’ Colin Vaines (Coriolanus) produce, while IM Global is co-financing the film and handling international sales. Lionsgate UK has UK rights and is planning a release in 2017.

Broccoli has been able to draw on some of her Bond collaborators for the production including costume designer Jany Temime, make-up and hair designer Naomi Donne, and casting director Debbie McWilliams.

Bell told Screen during a set visit that he is relishing the chance to work with multi-Oscar nominee Bening: “I was a big fan of hers, it seems like an opportunity to do a great two-hander with this great actress. You’re working with a real pro which brings a nice intensity to it. She’s very focused on her work, and we respect each other’s process. But we’ve also already had a laugh together.”

The film has been a passion project for Broccoli for many years with the Bond producer acquiring film rights more than 20 years ago.

“I just loved the romance of [the story],” she said. “I love Gloria’s fascination with Liverpool. It’s a very touching story.”

After working on the complexities of TV series Sherlock, McGuigan said he wanted to “do something closer to my independent film roots, something much more about characters and story.”

He added that although the film confronted illness and death, “we’re trying to make something unsentimental…we’re not trying to build too much into it, we want some lightness.”

Vaines told Screen of the Liverpool shoot: “Liverpool Film Office has helped us in every possible way. They are a real credit to the city. It’s a versatile place to shoot….We can use it for pure Liverpool scenes and also there are places that look like New York and London.”

The production’s Liverpool and London shoots are now wrapped and the film has moved into Pinewood’s new Studio 3 with shoot due to wrap on August 8.

In Liverpool, the production shot on the Royal Iris Mersey Ferry, at Liverpool Playhouse, the Philharmonic Pub, and at residences on Rundle Road and Huskisson Street.

In London, locations used include Hornsey Town Hall, the Phoenix Cinema in Finchley, the London Transport Museum Depot in Acton, MC Motors in East London, the Everyman Cinema Muswell Hill and the Rivoli Ballroom in Brockley.

Sets to be constructed at Pinewood include the interior of the Turner family home in Liverpool and Grahame’s Manhattan apartment.