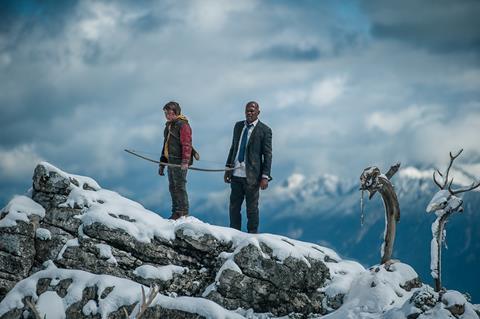 As previously reported, Samuel L Jackson and 13-year-old Onni Tommila lead the cast. They are pictured in this first image from the film. The cast also features Jim Broadbent, Ray Stevenson and Mehmet Kurtulus.

Big Game has shot for eight weeks on locations across Bavaria and at Bavaria Film Studios.

Jackson plays the US president, whose plane is shot down. He is stranded in the wilderness with only a 13-year-old boy to help him evade the terrorists.

A Finnish-German-UK co-production, Petri Jokiranta produces for Subzero, alongside Will Clarke and Andy Mayson for Altitude Film Entertainment, with Jens Meurer of Egoli Tossell Film as the German producer.

Altitude Film Sales is handling worldwide sales, with Altitude and WME jointly representing North American rights. Entertainment One has taken all rights to the film for the UK; Ascot Elite for all German-speaking territories; and Nordisk for Scandinavia.

Helander, who also co-wrote the script, said: “Big Game is an action adventure story on an epic scale. I’m delighted to be taking this genre on as it has always been very close to my heart, as action-packed adventure stories contain the elements that I believe make movies that are worth watching.”