Agnieszka Smoczynska had already collaborated with screenwriter Robert Bolesto on her short films but the impetus for her trippy $1.6m (€1.5m) feature debut came as a surprise. 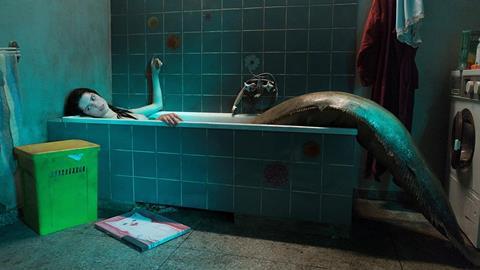 Bolesto told her about an idea he had, inspired by two of his friends who grew up in and around a 1980s nightclub. It resonated with Smoczynska.

“I was amazed when I heard this because my mom used to run two such clubs/restaurants and I grew up observing very closely this type of environment,” says the Polish director. “That was my kind of playground, full of erotica, vodka and sadness.”

The Lure follows a pair of mermaids who establish residency at a nightclub and bewitch the clientele with their singing voices.

Smoczynska, a graduate of the Krzysztof Kieslowski Faculty of Radio and Television and Andrzej Wajda’s Master School of Film Directing in Warsaw, shot in a former hotspot in Warsaw called Adria.

Painter Aleksandra Waliszewska came up with the fauvist set design and colour palette. “Aleksandra’s paintings are full of perverse fabulousness for adults,” says the director, “where blood and brutality interfere with innocence and lyricism.”