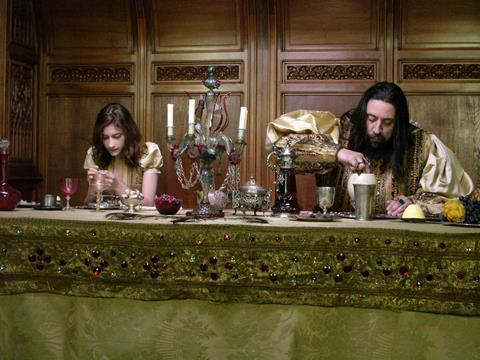 For once, the sexual content in a Catherine Breillat is implicit instead of wildly in-your-face, but otherwise, offbeat fairy-tale venture Bluebeard (Barbe-Bleue) bears the unmistakable stamp of the veteran French provocatrice. An austere, low-budget video-shot venture, this quietly surreal Freudian fable is an elegant exercise of style with a sly humorous undertow. While revealing no radically new vision, thematically or cinematically, the film is distinctive enough to keep Breillat followers happy, and upmarket niche sales should be healthy while festivals come queuing.

“Using a lively and much younger female cast than usual, Breillat makes a pointed, quasi-autobiographical comment on girlhood, its dreams and rebellious impulses”

It’s no surprise that Breillat would attempt a feminist take on the grisly tale of Bluebeard, which British novelist Angela Carter very much made her own: while there’s no explicit sourcing here of Carter’s rewrite (in her 1979 collection The Bloody Chamber), it’s surely an implicit reference. A parable of male power and female sexual knowledge, Breillat’s version of the story is primarily set - judging by the wardrobe - in 16th-century France. It begins with two adolescent girls, Marie-Catherine (Creton) and reputed ‘bad seed’ younger sister Anne
(Baiwir), being sent home from their convent school when their father dies. There seem few prospects for the newly impoverished girls, until news comes that local baron Barbe-Bleue (Thomas) is looking for a bride. He is reputed to be both ugly and dangerous, but defiant Anne, chosen to marry him, is game for anything and proves an unflappable match for the
hefty, hirsute Bluebeard.

The Bluebeard story itself is followed along traditional lines, while in a parallel thread, the Charles Perrault version of the tale is read, possibly in the present day, by a much younger pair of siblings, Marie-Anne and Catherine (Giovannetti, Lopes-Benites). Part of the fun in this mischievous mirroring lies in the comic gloss that the latter sisters put on the story and on adult sexuality, especially when the young Lopes-Benites, possibly improvising, offers her own bizarre theories about what marriage entails.

The film’s great surprise is its austere restraint, the most shocking moment coming when the little Lopes-Benites takes the older Baïwir’s place as Barbe-Bleue’s bride confronts the charnel-house horrors of his locked room. Another shock comes right at the end, and it is typical of Breillat’s mischief that it involves a character we hardly expect to get into trouble.

Using a lively and much younger female cast than usual, Breillat makes a pointed - and one suspects, quasi-autobiographical - comment on girlhood, its dreams and rebellious impulses. Boasting a Depardieu-scale bulk and looming menace, Thomas’s ogre-husband is at once baleful and charming.

Blue Beard is a small-scale follow-up to the torrid costume-drama flourish of Breillat’s The Last Mistress, but it shows the director on her most controlled cerebral form, even in this minor key.